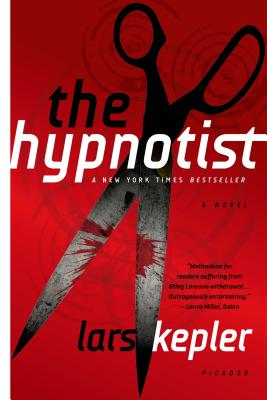 By Lars Kepler, Ann Long (Translator)
Call or email to see if a used copy is available.
Out of Print

In Sweden a family is brutally murdered with only the son surviving. He has one hundred knife wounds. Detective Inspector Joona Linna seeks the help of a hypnotist who swore he would never again do this. When the hypnotist sees what the boy saw a series of terrifying events begin. Very entertaining. — Sarah Knight

“Detective Inspector Joona Linna takes on a bizarre murder case when a young Swedish family is found brutally slain in their own home. Questioning the surviving witness is not an option, as the young boy's life hangs by a thread. What Linna needs is a hypnotist. Erik Maria Bark is that man, but the problem is he gave up practicing 10 years ago after a tragic accident. The detective won't take no for an answer, so Erik puts the boy in a trance. What happens next won't just threaten everything Erik has managed to rebuild, it will tear families apart, turn friends into bitter enemies, and rob Erik of Benjamin, his only son. Gritty, fast-paced, and impossible to put down.”
— Paula Longhurst, The King's English, Salt Lake City, UT

Prepare for The Hypnotist to cast its spell

In the frigid clime of Tumba, Sweden, a gruesome triple homicide attracts the interest of Detective Inspector Joona Linna, who demands to investigate the murders. The killer is still at large, and there's only one surviving witness the boy whose family was killed before his eyes. Whoever committed the crimes wanted this boy to die: he's suffered more than one hundred knife wounds and lapsed into a state of shock. Desperate for information, Linna sees only one option: hypnotism. He enlists Dr. Erik Maria Bark to mesmerize the boy, hoping to discover the killer through his eyes.

It's the sort of work that Bark has sworn he would never do again ethically dubious and psychically scarring. When he breaks his promise and hypnotizes the victim, a long and terrifying chain of events begins to unfurl.

An international sensation, The Hypnotist is set to appear in thirty-seven countries, and it has landed at the top of bestseller lists wherever it's been published in France, Holland, Germany, Spain, Italy, Denmark. Now it's America's turn. Combining the addictive power of the Stieg Larsson trilogy with the storytelling drive of The Silence of the Lambs, this adrenaline-drenched thriller is spellbinding from its very first page.

Lars Kepler is the pseudonym for a literary couple who live and write in Sweden. Their novels, including The Nightmare and The Hypnotist, have been number-one bestsellers in more than a dozen countries, including France, Spain, Germany, Italy, Holland, and Denmark. The film version of The Hypnotist is directed by Lasse Hallstrom (Chocolat, The Cider House Rules).


“One convincing psychotic is about as much as most thriller writers can handle, but Kepler delivers them by the roomful. It makes you wonder where the Swedes have been keeping him/them all this time. I imagine a cabal of nefarious Stockholm publishers loading bulk orders of Larsson onto cargo planes bound for the U.S. while they rub their hands together over a copy of The Hypnotist stamped Not for Export. It’s that good. It’s the hard stuff.” —Lev Grossman, Time

“Maximum intensity, both psychological and physical, is packed into [this] story.” —New York

“A gripping series of twists and turns . . . a natural successor to the Stieg Larsson series.” —Parade

“Full of surprises and more than enough twists to keep those pages turning well into the night.” —NPR.com

“A new star enters the firmament of Scandinavian thrillerdom, joining the likes of Larsson, Nesbø and Mankell.” —Kirkus Reviews

“Does the world really need another Swedish thriller? The spellbinding exploits of Detective Inspector Joona Linna and the hypnotist he hires to solve a murder make the answer clear.” —People

“Outrageously entertaining . . . Kepler makes you feel that if homicidal maniacs really were to start popping up in Stockholm, this is exactly how it would play out.” —Laura Miller, Salon.com

“If The Hypnotist doesn't find its way onto every reader's ‘Best Of’ list by the end of the year, it will only be because not everyone read it. Don't be one of the unfortunate few. But put on an extra sweater while you are reading; this one will chill you to the bone.” —Bookreporter.com

“The brutal slaying of gambling addict Anders Ek, his wife, and his younger daughter propels this outstanding thriller debut . . . A well-integrated subplot involving a gang of terrifying boys and girls adds to the suspense. Readers will look forward to seeing more of Linna in what one hopes will be a long series.” —Publishers Weekly (starred review)

“All the hallmarks of a classic . . . Tense, clever and multilayered . . . This is crime writing at its most devilishly involving.” —Marie Claire (UK)

“This is the thriller that’s taking Europe by storm. Written by a Swedish husband-and-wife team whose identity was originally a closely guarded secret, it might just be the next Girl with the Dragon Tattoo . . . Ferocious, visceral storytelling that wraps you in a cloak of darkness that almost blots out the light, but still feeds the imagination: stunning.” —The Daily Mail (UK)

“If the post-Stieg Larsson boom was ebbing, Kepler promises to revitalize the genre by bringing a sulphurous whiff of Hannibal Lecter to this case . . . It’s a pulse-pounding debut that is already a native smash.” —Financial Times

“Now ranks second only to Stieg Larsson’s Millennium Trilogy in terms of worldwide sales for a Swedish author . . . Far more energetic than Henning Mankell, as socially involved as Larsson but a better writer, Kepler matches the great Jo Nesbø for gothic excitement.” —The Australian

“If you don’t get carried away by this book, the question is whether you like the crime thriller genre at all.” —Børsen (Denmark)

“The Hypnotist is a rare beast: a Swedish thriller on a high international level with a smart, effective and surprising plot. The narrative has a skillful, refined, pulsating drive and the writing is sharp, convincing and multilayered.” —Kristianstadsbladet (Sweden)

“The Hypnotist is—yes—impossible to put down. The Hypnotist is—yes—ingeniously put together, like a Swiss watch. The Hypnotist is—Yes!—fabulously entertaining, even gruesomely so. But it is also a serious meditation on evil, human weakness, the infinity of the mind, and the capriciousness of fate. My wife stole it from me before I was finished reading it and tore through it. Then I stole it back, to my great pleasure!” —Colin Harrison, author of The Finder

“Soon there will be Stieg Larsson crime fiction people and Lars Kepler crime fiction people. I’m henceforth in the latter camp. The Hypnotist is every bit the equal of the Millennium Trilogy—riveting narrative momentum, fascinatingly grisly forensics, existential Nordic dread. But there’s more: superior prose, no cartoony characters, and beneath all the noir, plenty of old-fashioned heart.” —Kurt Andersen, author of Heyday