Big Hair and Plastic Grass: A Funky Ride Through Baseball and America in the Swinging '70s (Paperback) 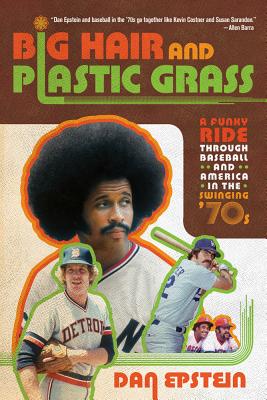 The Major Leagues witnessed more dramatic stories and changes in the ‘70s than in any other era. The American popular culture and counterculture collided head-on with the national pastime, rocking the once-conservative sport to its very foundations. Outspoken players embraced free agency, openly advocated drug use, and even swapped wives. Controversial owners such as Charlie Finley, Bill Veeck, and Ted Turner introduced Astroturf, prime-time World Series, garish polyester uniforms, and outlandish promotions such as Disco Demolition Night. Hank Aaron and Lou Brock set new heights in power and speed while Reggie Jackson and Carlton Fisk emerged as October heroes and All-Star characters like Mark "The Bird" Fidrych became pop icons. For the millions of fans who grew up during this time, and especially those who cared just as much about Oscar Gamble's afro as they did about his average, this book serves up a delicious, Technicolor trip down memory lane.

DAN EPSTEIN is an award winning journalist, pop culture historian, and avid baseball fan who has written for Rolling Stone, SPIN, Men’s Journal, the Los Angeles Times, USA Today, MOJO, Guitar World, Revolver, LA Weekly and dozens of other publications. He is the author of the acclaimed Big Hair and Plastic Grass: A Funky Ride Through Baseball and America in the Swinging ‘70s. He currently resides in Los Angeles.

“I used to tell people 'You had to be there.' Well, now you don't have to have been there. You can relive the color, the passion, the wild, raucous fun of baseball in the '70s in Big Hair and Plastic Grass. Dan Epstein and baseball in the '70s go together like Kevin Costner and Susan Sarandon.” —Allen Barra, Wall Street Journal

“The '70s were a colorful, druggy time in baseball, as well as everywhere else, but this history makes the decade particularly vivid....As Dan Epstein's enormously entertaining Big Hair And Plastic Grass: A Funky Ride Through Baseball And America In The Swinging '70s demonstrates, the decade was colorful in many ways....Epstein's book waves its freak flag high.” —The Onion A.V. Club

“Dan Epstein examines how coolness landed on our national pastime along with fraudulent sod. So put Boz Scaggs and the Bay City Rollers on your iPod, grab your baby oil for maximum skin damage, and bring Big Hair to the beach.” —The Daily Beast

“There is a trove of nuggets many of us either never knew -- Charlie Finley giving his three-time world champion A's "gem free" Series rings; the Mets pantomiming a game at Shea Stadium during the 1977 blackout; Luis Tiant paying $750 to have a toupee made by Monsanto, the inventor of AstroTurf -- or forgot...savor the good parts, which are plentiful.” —The New York Times

“Epstein is a thorough researcher, a devoted fan of the game, and an entertaining writer.” —Publishers Weekly

“What the 1960s were to America, the 1970s were to baseball, and Dan Epstein has finally given us the swinging book the '70s deserve.” —Rob Neyer, ESPN.com

“Baseball fans and non-fans alike will revel in this loving look at a long-gone era.” —Kirkus Reviews

“If Jim Bouton's 1970 memoir Ball Four was the book that showed what sex, drugs and rock 'n' roll were doing to pro baseball, Epstein's Big Hair and Plastic Grass is the book that shows what that 1970s brand of baseball did to the rest of us. Only someone who loves America could write this book. This is an ESPN Classics trip right through the freaky heart of our national identity.” —Dean Kuipers, columnist, Los Angeles Times

“Enjoy the seventies, friends; the eighties were one big snoozefest by comparison.” —Ron Kaplan's Baseball Bookshelf

“I'll buy any book with Dan Epstein's name on the cover.” —The Millions

“If Roger Angell is baseball writing's perfectionist Tom Seaver, then Dan Epstein must be its irrepressible Dock Ellis. His irreverent prose pops like a Nolan Ryan fastball, rages like an Earl Weaver tirade, and is as memorably untamed as Oscar Gamble's afro. Epstein lives and breathes baseball and pop culture with equal passion and intensity--and will make you care deeply about both.” —Adam Langer, author of Crossing California and The Thieves of Manhattan

“A detailed and comprehensive overview of a turbulent decade in baseball….Overall if you enjoy the 70's, this is a great book. You will really enjoy re-living each year and seeing how much changed in only ten short years. Dan Epstein did a really great job with this book.” —Gregg's Baseball Bookcase