The Street of a Thousand Blossoms (Paperback) 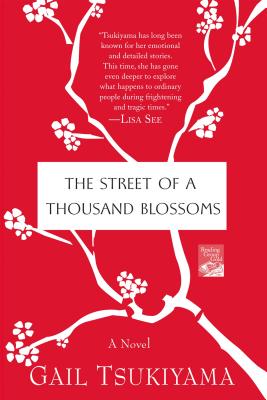 It is Tokyo in 1939. On the Street of a Thousand Blossoms, two orphaned brothers dream of a future firmly rooted in tradition. The older boy, Hiroshi, shows early signs of promise at the national obsession of sumo wrestling, while Kenji is fascinated by the art of Noh theater masks.

But as the ripples of war spread to their quiet neighborhood, the brothers must put their dreams on hold—and forge their own paths in a new Japan. Meanwhile, the two young daughters of a renowned sumo master find their lives increasingly intertwined with the fortunes of their father’s star pupil, Hiroshi.

The Street of a Thousand Blossoms is a powerfully moving masterpiece about tradition and change, loss and renewal, and love and family from a glorious storyteller at the height of her powers.

Gail Tsukiyama is the bestselling author of ?ve previous novels, including "Women of the Silk "and "The Samurai's Garden," as well as the recipient of the Academy of American Poets Award and the PEN Oakland/Josephine Miles Literary Award. She divides her time between El Cerrito and Napa Valley, California.