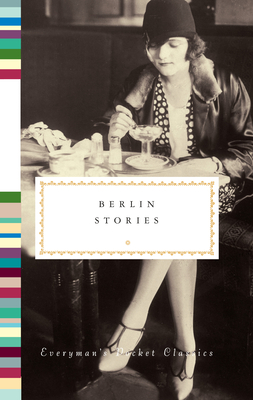 A gorgeously jacketed hardcover anthology of classic stories set in Berlin, by an international array of brilliant writers.

Spanning more than a century, this collection of stories reflects Berlin's rich and turbulent history, chronicling the creative ferment of the Weimar Republic, the devastation of wartime, the cruel divisions of the Berlin Wall, and the aftermath of reunification. Classics by Theodor Fontane and Robert Walser provide a window on privileged society at the turn of the century. Alfred Döblin, Erich Kastner, Vladimir Nabokov, and Christopher Isherwood illuminate the frenetic Golden Twenties and the ruinous crash that followed, while marginal youths roam the city's seamy underside in Irmgard Keun's The Artificial Silk Girl and Ernst Haffner's Blood Brothers. The hero of Thomas Wolfe's You Can't Go Home Again visits a city shadowed by Hitler's rise, while in Hans Fallada's Alone in Berlin a working-class couple quietly resists the Nazis. Cold War espionage enlivens works by Len Deighton and Ian McEwan; Christa Wolf's They Divided the Sky and Peter Schneider's The Wall Jumper depict the Berlin Wall's impact on a personal scale; and Thomas Brussig's Stasi officers engage in meaningless surveillance in Heroes Like Us. Günter Grass shows us German reunification through the eyes of an elderly Luftwaffe veteran while Uwe Timm does so through a writer's madcap wanderings in a bewildering post-Wall landscape. Finally, more recent arrivals--from Chloe Aridjis's Mexican-Jewish university student in Book of Clouds to the desperate African refugees in Jenny Erpenbeck's Go, Went, Gone--bear witness to Berlin's continuing evolution as an arena of the possible.

Philip Hensher's novels include The Northern Clemency, which was short-listed for the Man Booker Prize; Kitchen Venom, which won the Somerset Maugham Award, and The Mulberry Empire, which was long-listed for the Man Booker Prize. Chosen by Granta as one of its Best Young British Novelists, he is professor of creative writing at Bath Spa University and a columnist for The Guardian, The Spectator, and The Independent. He lives in London.