Good Things Happen Slowly: A Life In and Out of Jazz (Hardcover) 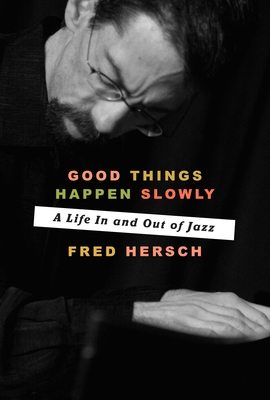 Fred Hersch is one of the greatest jazz pianists of his generation. This is his story--from upper middle-class Midwestern beginnings to wild times in New York City where he ultimately forged his illustrious career. Hersch is the first openly gay, HIV positive jazz man. In the overtly masculine world of be-bop and straight-ahead jazz, his was a difficult road in coming to terms with who he was and dealing with serious health concerns. Readers and listeners of jazz will appreciate this candid and musical memoir. — Stan Hynds

Jazz could not contain Fred Hersch.

Hersch’s prodigious talent as a sideman—a pianist who played with the giants of the twentieth century in the autumn of their careers, including Art Farmer and Joe Henderson—blossomed further in the eighties and beyond into a compositional genius that defied the boundaries of bop, sweeping in elements of pop, classical, and folk to create a wholly new music.

Good Things Happen Slowly is his memoir. It’s the story of the first openly gay, HIV-positive jazz player; a deep look into the cloistered jazz culture that made such a status both transgressive and groundbreaking; and a profound exploration of how Hersch’s two-month-long coma in 2007 led to his creating some of the finest, most direct, and most emotionally compelling music of his career.

Remarkable, and at times lyrical, Good Things Happen Slowly is an evocation of the twilight of Post-Stonewall New York, and a powerfully brave narrative of illness, recovery, music, creativity, and the glorious reward of finally becoming oneself.

Jazz pianist, composer, activist, and educator FRED HERSCH is a ten-time Grammy nominee and the recipient of a 2003 Guggenheim Fellowship in Composition. He was named a 2016 Doris Duke Artist and has twice been awarded Jazz Pianist of the Year by the Jazz Journalists Association. He concertizes worldwide as a solo artist, as a collaborator, and with the Fred Hersch Trio. He was a longtime member of the Jazz Studies faculty of the New England Conservatory and now teaches at Rutgers University. He is the subject of the feature documentary The Ballad of Fred Hersch. He lives in New York City and Pennsylvania with his partner, Scott Morgan.

“Hersch brilliantly captures the spontaneity and sensitivity required to play jazz at the highest level, perhaps best expressed by one of his mentors, saxophonist Joe Henderson: ‘If you feel it, it’s right. If you think it, it’s probably not right.’… One of the most honest and moving memoirs ever written by a jazz musician.”
—Washington Post

"A revelatory memoir."
—The New Yorker

"Again and again, Mr. Hersch shares details—about drugs or sex or the music life—that others might have held back. Yet that raw honesty and immediacy is probably why so many of us find his music so compelling. By the same token, that's why this book earns a place as one of the great contemporary jazz memoirs."
—Wall Street Journal

“Two powerful forces are at work in this engaging memoir—the personal rise of Fred Hersch from obscurity to undisputed prominence in the world of jazz and the devastating advance of AIDS into the neighborhoods of gay America. That these two disparate phenomena could be braided so evenly into a vivid, forward-rolling narrative is the passionate wonder of Good Things Happen Slowly.”
—Billy Collins, former U.S. Poet Laureate

“A motif running through Good Things Happen Slowly focuses on the power of self-confidence, an attribute that has long helped to define Fred Hersch’s music. It is a quality no less evident in this brave memoir: a coming of age book about jazz, sexual identity, and creative authenticity that is also one of the shrewdest portraits of the New York club scene ever written.”
—Gary Giddins, author of Visions of Jazz and Bing Crosby: A Pocketful of Dreams

“Honest and well-wrought… Hersch wonderfully captures the experience of ensemble-jazz improvisation – ‘it’s almost sex’ – as well as the colorful characters throughout… Hersch’s narrative really grips during his agonizing recovery from a two-month, near-death coma resulting from AIDS complications, an ordeal that lends depth and pathos to this candid memoir.”
—Publishers Weekly

“Boundaries are made to be broken. In Fred Hersch’s stunning memoir, those boundaries arise on the bandstand, backstage, in relationships, with HIV, in recovery, and in activism. Storytelling becomes yet another way of pushing through them. Hersch tells his story as only a great pianist can, unfolding it like a Bach chorale, giving attention to each voice, each love, each heartbreak, and each triumph. Through jazz, a performer shares both his virtues and flaws, offering a reflection of the world we live in; improvisation, jazz’s key principle, empowers a musician to recover from wrong turns, transforming misfortunes into guiding lights. Good Things Happen Slowly is a powerful evocation of those ideas made real in life, brilliantly mapping Hersch’s progress toward freedom.”
—Jason Moran, pianist, composer, Artistic Director, Jazz at the Kennedy Center

"To the acclaim Fred Hersch has rightly earned as one of America’s great jazz pianists, one can now add accolades for his abilities as a riveting story-teller. Good Things Happen Slowly flows with the sensitive pacing and lyricism of Hersch's music as it traces two contrapuntal coming-of-age tales: growing from child prodigy to jazz master; and finding self-acceptance, courage, and love as a gay, HIV-positive man. The two lines come to harmonize beautifully in this frank, vivid, and moving account of a creative life lived to its fullest."
—Alisa Solomon, author of Wonder of Wonders

"In Good Things Happen Slowly, pianist and composer Fred Hersch has written a remarkable human document, the record of a supremely gifted person’s insistence on leading a full life both as an artist and as a gay man brought, more than once, to the brink of death by HIV. The story makes gripping reading, alternately exhilarating and harrowing, full of the love of music and life itself. Brave, wise, and honest, this is an inspiring – and, finally, awe-inspiring – book."
—Tom Piazza, author of Devil Sent the Rain and Why New Orleans Matters