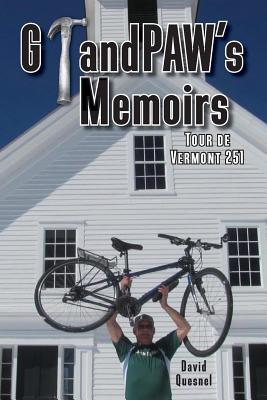 "Dave Quesnels's book on bicycling across Vermont, top to bottom, is a gem. It's about a lot more than just bicycling through the holes and vales and open countryside. Across the visits to all 251 towns (many of which are more geographical expressions that towns or villages in the normal sense of the term), he weaves in observations about life in the Green Mountain State and entertaining bits of history.
Dave's descriptions of life on the road aboard a bicycle come in a style that brings the imagery and the people he encounters along the way to life. This is a narrative that could easily have drifted into a formulaic recounting where each installment in his quest to travel to all the town's becomes a repetitive tale of challenges faced, hills overcome, and quirky things that happened. But Dave's creative writing keeps the pages turning.
Who couldn't find his observations about general stores and recreation parks arresting and thought provoking? The same for the comments about the particular characteristics of the town's and villages, large and small. Whether it's Burlington or Buell's Gore, each gets their moment.
It's a small state, but there's a lot of variety on offer in Vermont.There are also the common ties that bind the place together. And for those whose primary interest is the joy of biking and physical demands that imposes, along with mental rush of that experience, you won't be shortchanged either.
Not a bad way to see the state, it turns out--as Dave says, you notice more things when you're going 10 miles an hour instead of 50 or 60. It's definitely worth a read, whether you're a fan of all things Vermont or not."
-- Andy McKeever

David was born in Middlebury, Vermont on September 15, 1945. He spent his early childhood living alongside a dirt road in Whiting Vermont, where he attended a one room school. David is a true Vermonter who has lived his entire life in Vermont. Typical of Vermonters he has made a living performing a variety of jobs. He has been a baker, a builder and a bar tender. He has milked cows, put up hay and made maple syrup. He has been a construction project manager a building consultant and a property manager. He currently describes himself as a; semi- retired, self under employed building contractor turned author. David has hiked the length of Vermont, biked the length of Vermont, visited every town in Vermont with his grandsons and just recently biked to every town in Vermont. David has spent much of his life out in our Vermont woods, hiking, hunting, fishing, trapping, snow shoeing, and his attempt at golf had him out in the woods more than the fairways. It was while growing up on a dirt road and spending his early days in the nearby woods that David developed his unabashed love affair for our Vermont landscape and it’s in dominatable people.