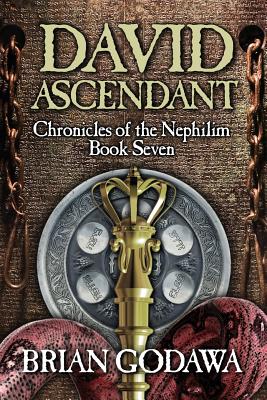 Six Giant Assassins. One Target: David of Judah. Goliath Was Only the First.

Everyone knows the story of David. Or so you think. No one has heard it told this way before.

In the days of Samuel the Seer, the Philistines are at the climax of a long war with Israel over the land of Canaan. There are still giants in Philistia left from Joshua's search and destroy mission of holy war generations earlier. Their numbers have grown.

The young Philistine giant warrior Goliath steals the sacred ark of the covenant from Israel. But Yahweh's curse upon Goliath's people for that deed sets in motion an obsession of revenge and the creation of an elite warrior cult of giants, The Sons of Rapha, whose sole ambition is to kill the promised messiah king of Israel.

The only problem is, Israel's King Saul is not that chosen one, because he is possessed by the evil spirit of an ancient malevolent ruler who seeks to kill that same unknown and spiritually anointed king.

They both discover it is David, son of Jesse, a young insignificant shepherd musician who woos the girls, and who miraculously slays Goliath in a battle contest. But now David is running for his life from both family and foe, gathering outlaws as allies, and eventually hiding in the one place no one would ever dream of: Goliath's home town, the Philistine city of Gath.

With David in the Serpent's lair, the queen of Gath trying to seduce him, King Saul and the Philistine giants trying to assassinate him, and David's three wives all vying for his attention, this gritty romantic action adventure story will take you places in the Bible you've never seen before.

You think you know how it ends. But there is so much more to the story than you ever realized.

The War of the Seed continues with the Philistines vs. the Messiah King of Israel.

Part of the Biblical Fantasy Series Chronicles of the Nephilim

David Ascendant is the seventh book of the Biblical Fantasy Series Chronicles of the Nephilim, an epic story that begins with Enoch and Noah and tells the Biblical storyline of the Genesis 6 Nephilim giants, hybrid offspring of the angelic Watchers mating with human women.

- David through new eyes that captures his spiritual zeal for God, but his passionate earthiness and nature as a man of bloodshed who also had a weakness for women.

- David's own torrid love affairs with his polygamous wives Michal, Abigail and Ahinoam.

- Details of a secret group of Rephaim giants called the "Yalid ha Rapha" in the Bible (Sons of Rapha), who were devoted to hunting down King David and killing him.

- Stories of David's "Mighty Men," or warriors of great feats like Benaiah, Joab, Abishai, and Ittai the Gittite who fought the giants seeking David.

- The strange hybrid warriors the Bible calls the Lion Men of Moab.

Learn About the Historical and Biblical Research Behind the Novel

Author Godawa shares the scholarly research that undergirds the fictional adventure. David Ascendant as an appendix that explores the Biblical background of Goliath and the five other giants mentioned in the Bible who were after David of Judah. He also takes a look at King Agag of Amalek, who might have been a giant, as well as the infamous Lion Men of Moab spoken of in 1 Samuel. In this Biblical story truth is stranger than fiction.

A NOTE ON THE AGE APPROPRIATENESS OF THE NOVELS

The Chronicles do deal with evil behaviors that would be appropriate for mature teens and above.