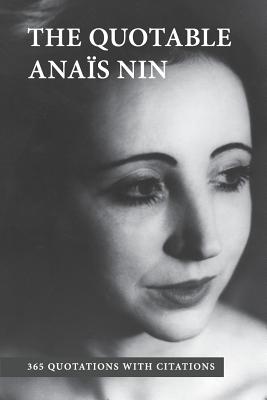 365 quotations from the work of diarist/novelist Anais Nin (1903-1977). The book is divided into five categories (Lust for Life, Love and Sensuality, Consciousness, Women and Men, Writing and Art) and contains validated citations (book title and page number). Anais Nin's ability to say the unsayable has made her one of the leading inspirational writers whose work has been quoted millions of time. The Quotable Anais Nin collects not only her most popular quotations, but those never published before as well.

Anais Nin (1903-1977) was one of the 20th century's most innovative and influential writers. When her famous diaries were published beginning in the 1960s, containing portraits of Henry Miller, Otto Rank, Antonin Artaud, Gore Vidal et al., she became an instant celebrity, drawings thousands to her lectures and millions to her books. One of her diaries, Henry and June, was made into a major Hollywood film of the same title (1990), and her Delta of Venus: Erotica was a posthumous bestseller. Because her work contains universal truths and meaning, it is as relevant today as it has ever been.