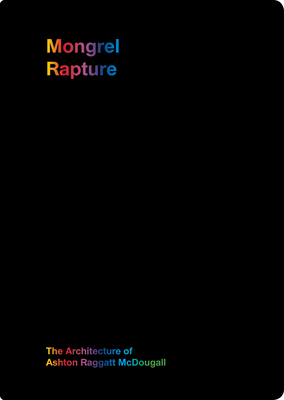 In his essay within Mongrel Rapture, the first monograph on the polarising work of Australian architectural practice Ashton Raggatt McDougall (ARM), Charles Jencks identifies ARM as one of a handful of architectural practices internationally that operate in a mold he describes as 'Radical Post Modernism'. Eschewing notions of good taste and formal purity, ARM opts instead for an 'architecture of ideas'. Drawing from diverse sources that range across everything from Le Corbusier to Robert Venturi, computer programming to biblical verse, ARM's architecture has been alternately celebrated and execrated by critics and the public alike. Despite ARM's radicalism and the attention it garners, however, the practice has also produced some of the most important public buildings in Australia, including the National Museum of Australia, Canberra (2001), Melbourne Recital Centre and MTC Theatre (2008), and the Perth Arena (2013). Mongrel Rapture combines extensive photography and plans of all of ARM's major buildings with essays from a range of highly regarded critics, including Jencks, Mark C Taylor, Leon van Schaik, Harriet Edquist and others. Part scrapbook, part critical exegesis, like the architecture it documents Mongrel Rapture is both confronting and thought-provoking: a vital publication for anyone with an interest in this practice and Australian architecture's very particular strain of 'Radical Post Modernism'.