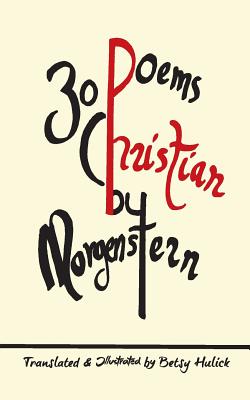 Christian Morgenstern (1871-1914) was the son and grandson of painters. His mother died when he was still a child; his relations with his father in later life were vexed. He traveled to Norway when young and in his early literary activity translated the plays of Henrik Ibsen. Unlucky in first love, he eventually married happily; and enjoyed several years of settled domesticity before dying of consumption at the age of forty-three, being spared the First World War. Morgenstern's poetry falls into two classes. One comprises a spiritual testament to his interest in Rudolf Steiner, whose lectures he attended regularly. These are not widely read. The poems he is known and loved for are of a different complexion entirely. They are collected under the title "Alle Galgenlieder," or "Complete Gallows Songs," although they are nothing if not cheerful. They are short, light-hearted, ingenious, and unexpected; and are permanently lodged in the German psyche, where they reside in transnational communion with runcible spoons and vorpal blades.