Yes Is the Answer: (and Other Prog-Rock Tales) (Mixtape) (Hardcover) | Northshire Bookstore
Skip to main content

Yes Is the Answer: (and Other Prog-Rock Tales) (Mixtape) (Hardcover) 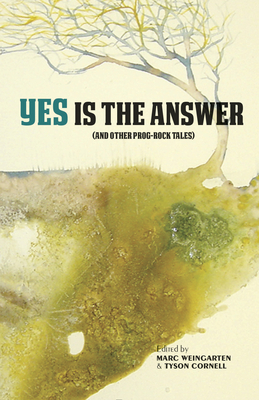 By Marc Weingarten (Editor), Tyson Cornell (Editor), Rick Moody (Contribution by)
Call or email to see if a used copy is available.
Out of Print

Most people would rather shoot themselves than listen to Tarkus. This book could change all that. Funny, touching, enlightening essays on that whitest of music--prog rock. A trip to a topographic ocean worth taking. — Charles Bottomley

Progressive rock is maligned and misunderstood. Critics hate it. Hipsters scoff at it. Yes Is The Answer is a pointed rebuke to the prog-haters, the first literary collection devoted to the sub-genre. Featuring acclaimed novelists Rick Moody, Wesley Stace, Seth Greenland, Charles Bock, and Joe Meno, as well as musicians Nathan Larson, and Peter Case, Yes Is The Answer is a book that dares to reclaim prog-rock as a subject worthy of serious consideration.

Marc Weingarten is the author of The Gang That Wouldn't Write Straight: Wolfe, Didion, Thompson, Capote, and the New Journalism Revolution and Station to Station. His work has appeared in The New York Times, Rolling Stone, Details, The Village Voice, and many others. He is also the co-producer of the documentary God Bless Ozzy Osbourne, as well as television's The Bachelor and The Bachelorette. He plays drums and sings in the band California Wildebeest and lives in Malibu with his wife and two daughters. Tyson Cornell is the founder of Rare Bird Lit, a marketing and publicity firm. He has worked with over ten thousand authors, including John Updike, James Ellroy, Carol Channing, Chuck Palahniuk, John Waters, and many more. He has also toured extensively throughout the United States, Japan, Europe, and the Middle East playing music to audiences big and small. He lives in Los Angeles with his wife, the artist Alexandra Infante, and their two children, Solaris and Vesper. Rick Moody is the best-selling author of Garden State, The Ice Storm, The Diviners, On Celestial Music, The Black Veil, Demonology, and others. He lives in New York. Charles Bock is author of the debut novel Beautiful Children was selected by The New York Times as a Notable Book of the Year for 2008, and won the 2009 Sue Kaufman Prize for First Fiction from the American Academy of Arts and Letters. He lives New York with his daughter. Seth Greenland is the Pushcart Prize-nominated author of The Bones, Shining City, and The Angry Buddhist. He is also a writer/producer of the Emmy-nominated HBO series Big Love. He lives with his wife and children in Los Angeles.