The Bigger They Are, The Harder They Fall: How to Fight a Bigger and Stronger Opponent in the Street (Paperback) 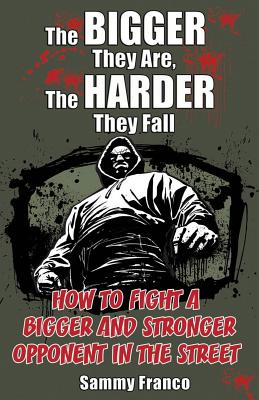 Learn How to Beat a Bigger and Stronger Opponent

When you're about to fight a thug on the street and you have to look up to stare into his eyes, you're bound to feel up pang of fear. But follow the solid strategies and self-defense techniques presented by self-defense maverick and innovator Sammy Franco, and the fight will end with your attacker looking up at you in confusion as he crashes to the ground.

Sammy Franco was concerned that no book on the market successfully tackled the specific problem of fighting a larger, stronger opponent. In The Bigger They Are, The Harder They Fall, he addresses that all-important issue and delivers the solid information you'll need to win a street fight when the odds seem stacked against you.

The Bigger They Are, The Harder They Fall will teach you:

In this one-of-a-kind skill building workbook, Sammy Franco calls upon his 30] years of experience as a reality-based self-defense expert to prepare you both mentally and physically for the fight of your life. Unless you're a lineman for the NFL, there may come a day when you will face an opponent who can dominate you through sheer mass and power. Read and study this book before that day comes.