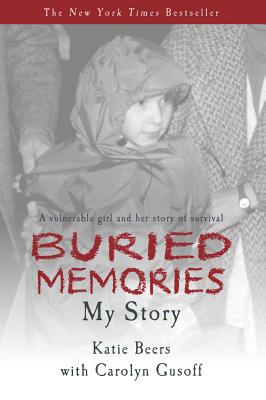 By Carolyn Gusoff (As told by), Katie Beers
Call or email to see if a used copy is available.
Out of Print

If you read A Child Called It or "Speak" and were looking for another chilling tale of trauma, read Katie's story of childhood abuse and kidnapping. One of my self-proclaimed dark high school students recommended it too. — Bonnie Winchester

Buried Memories: Katie Beers' Story is a never-before-told true story of survival, memory and recovery. Katie Beers was a profoundly neglected and abused child even before she was kidnapped on Long Island in 1992. Abducted by a family friend, she was held captive in an underground cell for 17 days and sexually abused. With smarts and strength, she slipped the bonds of captivity and began a new life. Katie, now a married working mother, has revealed her inspiring story of torment and recovery to the TV reporter who, as part of the original media frenzy covering the case, sought the ending to one of the most compelling sagas in New York criminal history. Katie, at the center of a national media storm, dropped out of sight 20 years ago and - until now - has never spoken publicly. Her appearance January on the Dr. Phil show and in People magazine to discuss her book is the first time she has ever spoken publicly. Katie is also expected to be featured

Carolyn Gusoff is an Emmy award winning broadcast journalist currently working the Long Island beat for WCBS-TV. She has covered some of the most high profile news stories in New York City. Prior to WCBS, she reported live daily for Good Day New York, Fox5 WNYW for 3 years, and was Long Island Bureau Chief at WNBC for 15 years, also co-anchoring Weekend Today in New York.A graduate of Columbia University and Cornell, she was born in NYC and lives on Long Island with her husband and two children.

Katie Beers is a married mother of two, currently works as a motivational speaker as well as in a family-run insurance business. As a profoundly neglected and abused child, she was kidnapped and locked in an underground coffin-like box for 17 days. The kidnapping of Katie Beers made worldwide headlines in late 1992. Katie, at the center of a national media storm, dropped out of sight 20 years ago. Katie has a Bachelor's degree in accounting and lives in rural Pennsylvania with her husband and their two children.