Year of Our Lord: Faith, Hope and Harmony in the Mississippi Delta (Paperback) 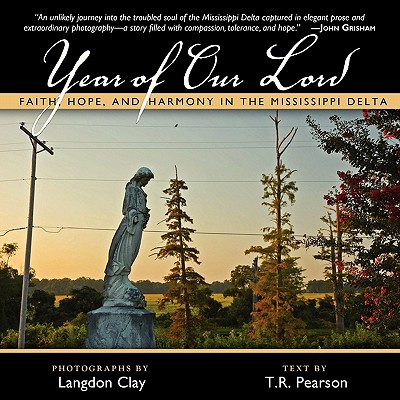 T. R. Pearson's new book focuses on a young man named Lucas McCarty whose life, according to Pearson, is "often difficult, always determined" because he has cerebral palsy. Now in his early twenties, Lucas spent the first part of his life as an Episcopalian. Dissatisfied with the tame nature of that brand of worship he became involved with an African-American congregation in Moorhead, Mississippi called the Trinity House of Prayer Holiness Church where he was embraced without so much as a raised eyebrow. On Sundays Lucas does not sit quietly in a pew. He sings in the choir. His condition prevents him from actually singing (Lucas cannot speak), but that does not stop him from making a joyful noise. Year of Our Lord is a moving testament to a remarkable young man and his place in a remarkable community. It is also a fascinating snapshot of an utterly unique region in America. Pearson paints a vivid portrait of the history, culture, and economy of the Mississippi Delta. Langdon Clay's accompanying photographs contribute beautifully to a book unlike any other you will find on our shelves. — Stan Hynds

Lucas McCarty lives in the Mississippi Delta. He is the only white congregant in the African-American Trinity House of Prayer Holiness church. Lucas is bereft of the ability to speak due to cerebral palsy, yet he sings there in the church choir. Thus is the subject of _Year of Our Lord_, a portrait of courage, acceptance and grace, rendered in the lyrical prose of T.R. Pearson and the haunting photographs of Langdon Clay. _Year of Our Lord_ is a visual journey, exploring one of the poorest parts of the American South, a place that economic progress has left behind. And it is a spiritual journey, a revelation of a community that has replaced the hope for earthly prosperity with an abundance of faith in God and the life beyond. The Delta's is a culture that can look upon Lucas and say, "God doesn't make a mistake." It is a place that in the face of abject poverty can proclaim, life offers "too much joy " Year of Our Lord, then, is an opportunity to see into another's world, and to embrace the best of it.

"What an amazing, and, thank you, Jesus, different kind of book about the Delta. But not surprising—if you know the work of either Pearson or Clay you would be expecting something special. Tom Pearson has written 11 novels, including the acclaimed A Short History of a Small Place, and Seaworthy, a true account of a 70-year-old man crossing the Pacific Ocean by raft. Clay has been a photographer for House and Garden and his work was featured in Jefferson’s Monticello. Just as extraordinary as those accomplishments is the true story of Lucas McCarty, a young white man in Indianola, afflicted with cerebral palsy, who can only communicate with Minspeak, an icon-based language delivered with a device known as the Delta Talker. How Lucas falls in with John Woods, the oxygen man on a catfish farm and an admitted, but redeemed killer, and how he leaves St. Stephen’s Episcopal Church to become a member of the Trinity House of Prayer, a black holiness church where he feels more accepted and encouraged as a choir member (“I am white on the outside but black on the inside.”) is a story that is, as Pearson says, “the most remarkable thing I know.” A striking, important, and unsentimental book that in all its colorful narrative and 39 photographs goes a long way toward trying to explain the inexplicable place that is the Delta." -Lisa Howorth

"It is a wonderful human story, deftly written and Langdon's photography is so evocative it makes me homesick. A wonderful read, for those with roots in the Miss'ippi Delta." -Morgan Freeman