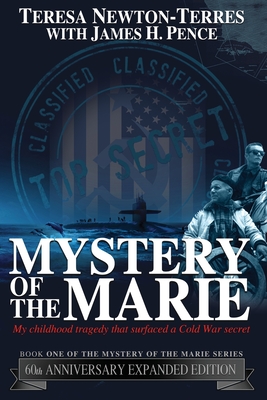 She grew up in the shadow of a mystery. Teresa Newton-Terres never knew her dad.

Losing him when she was only two, she lived with unresolved grief for almost fifty years. But when a dusty scrapbook hidden by her grandmother lands on her doorstep, she plunges into an abyss to uncover the story. In 1960, an eminent physicist and six other men including Newton-Terres' father left on a covert Raytheon-related underwater communications experiment. They never returned, and their converted landing craft, The Marie, vanished. After learning only four bodies were recovered and her father's not among them, Newton-Terres kept a flicker of hope alive.

In a passionate search that exposes black-ops secrecy and classified red tape, this courageous book reveals how a U.S. defense project coverup still has lasting repercussions for all the affected families. Showcasing careful forensic research and impeccable attention to detail, Newton-Terres offers a deep dive into her fearless quest for the truth and the inner joy she found. Mystery of the Marie: My childhood tragedy that surfaced a Cold War secret is a page-turning memoir that connects a national news event to an intimate personal story.

If you like government intrigue, captivating suspense, and brave crusaders for truth, then you'll love Teresa Newton-Terres and James H. Pence's inspiring account.

Buy the Mystery of the Marie, 60th Anniversary Expanded Edition and help surface the truth today