At Home with the Gopher Tortoise: The Story of a Keystone Species (Paperback) 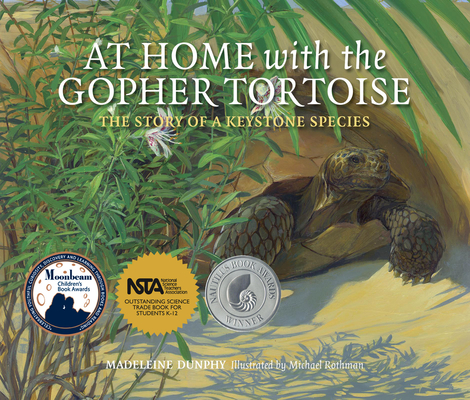 
Did you know that more than 360 different kinds of animals and plants depend upon gopher tortoise burrows for survival?

The gopher tortoise digs burrows to survive, and in the process helps other animals. Burrows protect the tortoise and other creatures from the heat of the summer, the cold of the winter, and forest fires. Some animals use the burrow to find food; others use it as a safe haven to raise their babies. Owls, rabbits, skunks, frogs and scorpions are just a few of the animals that inhabit gopher tortoise burrows.
Glorious illustrations reveal the gopher tortoise's world both below and above ground while inviting text introduces children to the pivotal role the gopher tortoise plays as a keystone species. In this fascinating tale of ecological interdependency, children will discover how the fate of one species can affect the fate of so many others.
Other Books in the Series: AT HOME WITH THE BEAVER: THE STORY OF A KEYSTONE SPECIES. Free downloadable activities can be found on the publisher's website.

Named an "Outstanding Science Trade Book for Students K-12" by the National Science Teachers Association and Children's Book Council for 2011.

"At Home With the Gopher Tortoise: The Story of a Keystone Species" is an illustrated nature/conservation book for children featuring a unique "keystone" species. With 360 different species of animals dependent on it for survival, the gopher tortoise presents a fascinating study of ecological interdependency. Because the gopher tortoise digs burrows for its dens in parts of Florida, Georgia, Alabama, and other Southeastern states of the US, many other species including skunks, birds, frogs, mice and snakes depend on the burrows for their own protection and survival of their young. Even burrowing owls use the gopher tortoise's burrows to shelter their fledgling owlets. Other insects use the burrows and other birds eat the insects that thrive in the burrows, completing yet more circles of interdependency. Even a bobcat may use a large burrow to hide and cool itself, while birds such as bobwhites, rabbits and lizards also find refuge in the burrows. In the soil loosened by the gopher tortoise's digging grow plants such as the scrub mint which provides a pleasant fragrance. In this way the life activities of the gopher tortoise provide protective, favorable habitat for a whole spectrum of living creatures who depend upon the continued survival of the gopher tortoise species for survival. "At Home with the Gopher Tortoise: The Story of a Keystone Species" shows how one humble species can be at the center of a vast web of creatures' lives. The beautiful detailed illustrations show many of the different animals in their natural settings, enhancing appeal to an audience of children ages 5-9.
Midwest Book Review


"Educational without being didactic, this picture book is an engaging introduction to the concept of a keystone speciesan animal on which many other species depend. Rothman's eye-catching, full-bleed acrylic paintings depict a wide variety of creatures utilizing the gopher tortoise's burrow. Almost every spread features a beautifully illustrated example of yet another animal, bird, or insectfrom skunks to owls to scorpionsthat relies on the gopher tortoise's burrow for shelter, nesting, and protection from predators. Dunphy's clear text adds additional interesting details ("The loose soil created by the tortoise's digging is perfect for growing plants"). One shortfall is the fact that the text is sometimes difficult to read, as it is printed in white directly on top of the illustrations. With a map showing the tortoise's range of habitat in the southeastern United States and an end note relating that the animal is a threatened species, this attractive book effectively demonstrates the interdependent nature of the animal world.” Booklist Review

"This book gives a simple yet in-depth look at the importance of an unassuming and often overlooked animal. Surprisingly, the gopher tortoise significantly affects more than 360 different kinds of animals that depend upon its burrows for shelter, food, or a place to raise young. This is a fascinating look at how one species can affect the fate of many." Science & Children

"This book would be doing a great service, even if it were not stunningly illustrated by Michael Rothman. But because every lavish two-spread takes you either close to, or deep inside, the ecologically essential Gopher Tortoise burrow and the many animals that make use of it, this book is all the more special. The Gopher Tortoise, native to the Southeastern United States, is known as a Keystone Species because over 360 other species depend on its burrows for nesting, protection, and sustenance. It is now listed as Federally Threatened in Louisiana, Mississippi, and western Alabama. I was surprised to learn what a wide variety of birds, insects and mammals is supported by the burrowing habits of the Gopher Tortoise. Creatures as diverse as the gopher cricket, mole skink, Northern Bobwhite, Red-Tailed Hawk, the Gopher Frog and even the bobcat would be adversely affected if the Gopher Tortoise became extinct. A short essay at the end of the book summarizes the plight of the Gopher Tortoise alongside sketches of the animals that interact with the Gopher Tortoise's burrows. Here is a bit more info on the Gopher Tortoise and a nice pictorial on how the Gopher Tortoise lives. There's also helpful site for land managers, developers, and others seeking to minimize their impact on the Gopher Tortoise. This is a beautiful book for teachers to read aloud in the classroom, or for naturalists to use in presentations to children. I hope the National Parks in Alabama, Mississippi, Louisiana, Georgia, and Florida are all aware of this very well-made and educational children's book."
Kid Lit Saves World

"For this excellent book, the author has written an interesting narrative that paints a picture of what it is like to live in the world of the gopher tortoise. She combines science with a writing style that is easy to follow and a joy to read. Children will quickly come to appreciate how many animals of all kinds depend on the tortoise for their survival.”
Through the Looking Glass Children’s Book Reviews

"Author Madeleine Dunphy and illustrator Michael Rothman have collaborated to create a delightful and informative book for young people. At a time when the gopher tortoise faces multiple threats throughout its range in the southeastern United States, and especially within the rapidly developing state of Florida, this book helps answer an every present question: "So... what good are gophers?" As Ms. Dunphy explains in compelling and evocative text that helps transport the reader to the gopher tortoise's physical environment, this species' importance extends well beyond its own intrinsic value. It is indeed an excavator extraordinaire, one that hosts some 350-400 other species. As noted in this book, the tortoise is a humble creature at the center of this web of life: a charming model of longevity and persistence. The lives of the other species are also well-depicted, completing the picture of a vibrant and interactive community. Mr. Rothman's excellent illustrations, with their impressive attention to detail, further enhance the feeling of being transported into the sometimes harsh, but also beautiful, sandhill and scrub habitats. This book is a welcome contribution to the literature that showcases an amazing animal and plant community, one whose central figure is a benevolent, burrowing landlord."
Joan E. Berish, Biological Scientist, Florida Fish and Wildlife Conservation Commission