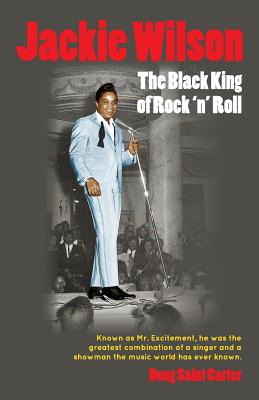 Known as Mr. Excitement, he was the greatest combination of a singer and a showman the music world has ever known. He was the eleventh artist elected into the Rock 'n' Roll Hall of Fame. Jackie Wilson had one of the largest fan clubs of any American Artist ever, his story reads like fiction yet it's true. Some of his many hits include, "Lonely Teardrops," Higher and Higher," "Baby Workout." and "Am I The Man."

Elvis Presley and Michael Jackson are two of the most widely known names in entertainment. Yet did you know that both Presley and Jackson were influenced by the singing and preforming styles of Jackie Wilson? Critics from around the world have hailed Jackie Wilson "The Black King of Rock 'n' Roll" as the purest vocalist of his generation and the most hypnotic performer ever.
One must wonder why only two of these superstars are readily recognized by the masses, while one is practically forgotten. The answer, like so many things in life, is complex.

The story of Jackie Wilson could easily be a fictional account of the rise and fall of a rags to riches superstar, However, in truth, this is an amazing story based on the facts of the world's greatest rock & roll performer. As unbelievable as it may be, there has never been a motion picture or television special devoted to the life and career of Jackie Wilson. Hopefully, this book, "Jackie Wilson The Black King of Rock 'n' Roll," will bring much-deserved attention to this marvelous talent and become a catalyst for more comprehensive projects in the future.

In addition to being the original hardest working man in show business, Jackie was also known as the Black Elvis Presley. The first time Jackie and Elvis met was in Los Angeles, CA in 1966. Jackie was performing and Elvis and his entourage went there specifically to watch him workout. After the show Jackie came up to Elvis and said, "they call me the Black Elvis Presley." From that point on they became fast friends who loved, admired and respected one another. G. C. Cameron, former lead singer of the Spinners, recalls, "Elvis was a friend of mine. Elvis lived around the corner from me when I lived in Beverly Hills. He loved Jackie; that's where he got a lot of his stuff from. People don't realize that. Jackie and Elvis were tight as a hatband." Jackie loved Elvis and has been quoted as saying, "I took as much from him as he took from me." As the author of this book I can testify that Jackie could drive crowds into a frenzy. A friend of mine once said you could put any top three stars of the day on one end of a stage and Jackie on the other end, and at some point no one would be watching the other three. This book is American History, Black History and Music History. Get your copy today, and tell a friend or two about it. They'll be glad you did.