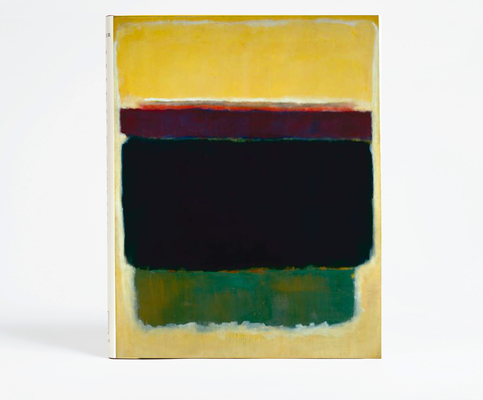 Mark Rothko: The Exhibitions at Pace is a highly-anticipated historical monograph on one of the greatest abstract painters of the twentieth-century.

This exceptional volume encompasses an extraordinary retrospective of paintings, all presented at Pace Gallery, which illustrates Rothko's contributions to early American modernism, his unprecedented transition into abstraction, and his groundbreaking mature work.

Pace Gallery founder, Arne Glimcher's influence in highlighting Rothko's visionary aesthetic and analyzing the progression of his career is embodied in this definitive publication, with original essays from esteemed art historians and exquisite color reproductions. Featuring an illuminating reminiscence by Glimcher, Mark Rothko at Pace faithfully preserves the artist's legacy while also extending his artistic achievements to new audiences alike.

Mark Rothko (b. 1903, Dvinsk, Russia; d. 1970, New York), a pioneer of the New York School, is predominantly recognized for his mesmerizing Color-field paintings of immense scale produced between 1949 and 1970, which followed his works of figurative and biomorphic imagery. His stylistic explorations resulted in a proliferation of works on paper and canvas, with layered transparencies of vibrant pigments and earth tones culminating in luminous and ethereal soft-edged compositions. His approach to painting emphasized an experimental engagement with process in order to fully articulate a universal expression. Among Rothko's artistic philosophies, he held that painting was a deeply psychological and spiritual experience through which basic human emotions could be communicated.Arne Glimcher founded Pace Gallery in 1960 in Boston. The gallery moved to New York in 1963, and has since opened locations in Beijing, Geneva, Hong Kong, London, Palo Alto, and Seoul. Glimcher has played a critical role in the careers of many of the world's greatest artists, among them Jean Dubuffet, Robert Irwin, Agnes Martin, Louise Nevelson, Robert Rauschenberg, Mark Rothko, and Lucas Samaras. In addition to organizing scholarly exhibitions, he has also published widely on the history of art. He is the author of the monograph Agnes Martin: Paintings, Writings, Remembrances, published by Phaidon Press in 2012, as well as Picasso, Braque and Early Film in Cubism; Modern Art and Modern Science: The Parallel Analysis of Vision, co-authored with Paul C. Vitz; and Louise Nevelson: A Monograph. Glimcher is also the producer and director of major films including Gorillas in the Mist, The Mambo Kings, and Just Cause, as well as Picasso and Braque Go to the Movies, which he co-produced with Martin Scorsese and directed. Arne Glimcher is a member of the Academy of Motion Picture Arts and Sciences, and Chairman of the Board of Directors for the African Environmental Film Foundation, which is dedicated to environmental education through film. In recognition of his commitment to the vitality of art worldwide, Glimcher was appointed Officer in the National Order of the Legion of Honor in 2003, conferred by the President of France. He is also the recipient of the Leonardo DiCaprio Foundation's Lifetime Achievement Award for his work in conservation.