The Catholic Controversy: A Defense of the Faith (Paperback) 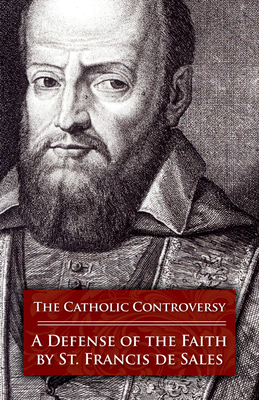 Between 1594 and 1598, a preacher named Fran ois converted 72,000 Protestants to the Catholic Faith. These are his words. ONE OF the most remarkable and well-documented events in Catholic history began when a young priest, Francis de Sales, volunteered to re-evangelize the Calvinists of the Chablais. Finding his preaching forcefully rejected, Francis de Sales shrewdly switched tactics and began a written apologetics campaign, posting pamphlets on walls and slipping them beneath doors under the cover of night. His defense of the Faith was so clear and thorough that at the end of four years nearly the entire population of 72,000 had returned to the Catholic Faith These powerful little tracts are as relevant today as they were in the late 1500s. De Sales draws support from Scripture, the Fathers and Doctors of the Church to address questions still frequently posed by modern Protestants. Revered as some of the most cogent arguments against Protestantism ever penned; they present a defense of the Catholic Faith that has never been equaled. "A full and complete demonstration of the Catholic religion." -Pope Pius IX.

St. Francis de Sales was born in 1567 to Francois and Francoise de Boisy in what is currently Haute-Savoie, France. His father sent him to a good school when he was young, and he received spiritual formation from the Jesuits. After a disturbing spiritual fear of being condemned, he eventually resolved his problem and decided to dedicate his life to God in 1587. He became a doctor of law at the age of 24 at the Jesuit College of Clermont, Paris, and was ordained a priest by Bishop Claude de Granier and stationed in Geneva in 1593. He became bishop of Geneva in 1602. Francis de Sales is the author of various collections of sermons on Mary, Lent, prayer and Christmastide, as well as a work entitled Set Your Heart Free, edited by John Kirvan. He was known as a spiritually understanding man as well as a friend of the poor. Though known for his great intellect and theological wisdom, he spoke with simplicity and earnestness, so that all could understand. An Introduction to the Devout Life , his best-loved work, is based on notes he wrote for a cousin for marriage, stressing that sanctity is possible in everyday life. He died in 1622 on December 28, and was canonized by Pope Alexander VII in 1665. His feast is celebrated on January 24.