Eucharistic Miracles: And Eucharistic Phenomenon in the Lives of the Saints (Paperback) 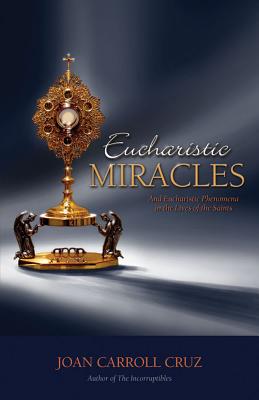 On many occasions throughout the history of the Catholic Church, God has provided visible proof of the invisible reality of the Real Presence of Jesus Christ in the Holy Eucharist.

In her book, Eucharistic Miracles, Joan Carroll Cruz documents 36 such miracles which occurred from 800 AD to the present day. This book tells of consecrated Hosts which have visibly turned to human flesh, have bled, levitated, and which have become hard as flint when received by a person in mortal sin. It details the official investigations that have been made into these miracles by scientists throughout the world, and where some can still be venerated today. Eucharistic Miracles also recounts miraculous Eucharistic phenomena in the lives of saints: saints who lived with only the Eucharist for sustenance, received Communication miraculously, or experienced raptures, ecstasies, levitations, visions, locutions, and more.

Pictures and photographs of the miracles, the churches they took place in, and the people involved are also included, adding the final touch to a comprehensive, detailed, and extraordinary overview of these miraculous happenings.

Eucharistic Miracles is a superb compilation of God's visible testimony of the truth of the Catholic Faith, proving the reality of one of its loftiest mysteries -- the Real Presence of Jesus Christ in the Holy Eucharist.

Joan Carroll Cruz is a native of New Orleans and is the educational product of the School Sisters of Notre Dame. She attended grade school, high school and college under their tutelage. Mrs. Cruz has been a tertiary in the Discalced Carmelite Secular Order (Third Order) since 1968; for eight years she served as Mistress of Formation (Novice Mistress). For her non-fiction books, Joan Carroll Cruz depended heavily on information received from foreign shrines, churches, convents and monasteries. Her books include The Incorruptibles, published in 1977; Desires of Thy Heart, a strongly Catholic-themed novel, also in 1977; Relics, published in 1983; Eucharistic Miracles in 1987; Secular Saints in 1989; Prayers and Heavenly Promises in 1990; Miraculous Images of Our Lady in 1993; Miraculous Images of Our Lord in 1995; Mysteries, Marvels, Miracles: In the Lives of the Saints in 1997; Angels & Devils in 1999; and Saints for the Sick in 2010.