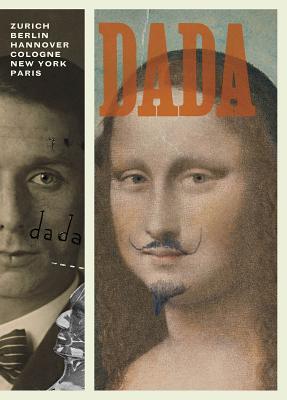 The supreme book of the nihilist and hilarious art movement. The single best survey of Dada art based on a great exhibition chronologically and geographically organized. There are the famous pieces that still pack a punch and a laugh like Duchamp’s Fountain, Oppenheim’s Breakfast in Fur, and Hausman’s Zeitgeist, but also plenty of great things to discover like the collage on the back cover—George Grosz’s Remember Uncle August, the Unhappy Inventor.

Now available in paperback, this lavishly illustrated and astonishingly comprehensive volume stands as the definitive study of the influential but deliberately elusive international Dada movement of the early twentieth century. Organized according to the primary city centers where this shifting, quintessentially avant garde movement emerged, Dada: Zurich, Berlin, Hannover, Cologne, New York, Paris features the work of 40 key artists, both infamous and lesser-known, including Louis Aragon, Hans Arp, Hugo Ball, Andr Breton, Otto Dix, Marcel Duchamp, Hannah H ch, Man Ray, Tristan Tzara and Kurt Schwitters, to name just a few, in media spanning painting, sculpture, photography, collage, photomontage, prints and graphic work. Dynamically designed with an uncommon intelligence suited to the complexity of the movement itself, it contains hundreds of reproductions of works which, until the major traveling exhibition of 2005 and 2006 for which this book was originally produced, had for the most part never been seen in one place together. Documentary images, topical essays and an invaluable illustrated chronology of the movement make this volume uniquely essential, along with witty chronicles of events in each city center, a selected bibliography and biographies of each artist, accompanied by Dada-era photographs.