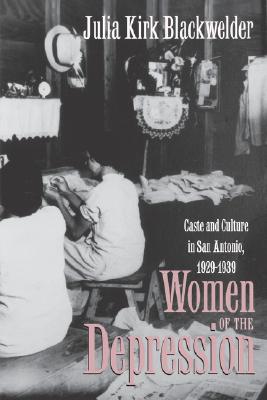 Even before the Depression, unemployment, low wages, substandard housing, and poor health plagued many women in what was then one of America’s poorest cities—San Antonio. Divided by tradition, prejudice, or law into three distinct communities of Mexican Americans, Anglos, and African Americans, San Antonio women faced hardships based on their personal economic circumstances as well as their identification with a particular racial or ethnic group.

Women of the Depression, first published in 1984, presents a unique study of life in a city whose society more nearly reflected divisions by the concept of caste rather than class. Caste was conferred by identification with a particular ethnic or racial group, and it defined nearly every aspect of women’s lives. Historian Julia Kirk Blackwelder shows that Depression-era San Antonio, with its majority Mexican American population, its heavy dependence on tourism and light industry, and its domination by an Anglo elite, suffered differently as a whole than other American cities. Loss of migrant agricultural work drove thousands of Mexican Americans into the barrios on the west side of San Antonio, and with the intense repatriation fervor of the 1930s, the fear of deportation inhibited many Mexican Americans from seeking public or private aid.

The author combines excerpts from personal letters, diaries, and interviews with government statistics to present a collective view of discrimination and culture and the strength of both in the face of crisis.

Julia Kirk Blackwelder is professor and head of the history department at Texas A&M University. Her most recent book is Now Hiring: The Feminization of Work in the United States, 1900–1995.