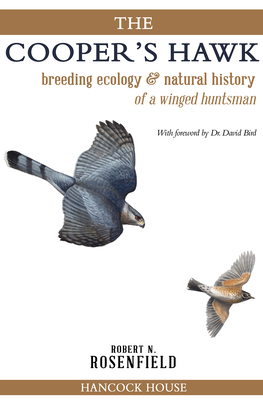 The Cooper's Hawk presents the general reader and professional biologists interested in birds and nature, with an authoritative account of the breeding biology of the what is perhaps the most abundant, backyard breeding raptor in North America. This urban status exists despite cross-generational human persecution through shooting of individuals and indirect felling of forests, their apparent preferred nesting habitat. Using conversational prose, the natural history of the bird's diet, including bird feeder use and disease concerns, courtship behavior, and the ecological themes of breeding density, reproductive success, and adult survivorship are described. There too is a focus on how and why fieldwork is conducted on this ubiquitous city dweller who preys mostly on birds, or 'urban fast food.' How urban birds may differ from their rural counterparts is addressed, and especially highlighted is the novel aspect of reproductive deceit in this red-eyed, blue-backed predator, as, unlike all other birds of prey studied to date, it is highly promiscuous. The text is complemented with original art and especially crisp photographs that demonstrate this bird's natural history.

Robert N. Rosenfield is Professor of Ecology at the Department of Biology, University of Wisconsin-Stevens Point, where he teaches Ecology, Ornithology, and Raptor Ecology. His courses highlight experiential, hands-on fieldwork for undergraduate students with Cooper's Hawks, including two field-courses in tundra settings, Subarctic Ecology and Survey of Gyrfalcons in Alaska, and Arctic Ecology and Survey of Peregrine Falcons in Greenland. He has made 20 trips to Greenland to study Peregrine Falcons. His research with raptors began with capture and banding of migratory hawks, falcons, and owls at the Hawk Ridge Bird Observatory in his home town of Duluth, Minnesota in 1973. This experience sparked his M.S. research at UWSP on the nesting biology of Broad-winged Hawks in Wisconsin during 1976-1981. Concurrent with this thesis work he was invited by the state of Wisconsin in 1980 to investigate the breeding status of the Cooper's Hawk, a bird deemed at the time to be in population peril. This work led to the discovery of a thriving nesting population, and launched a 38-year, ongoing research of population, behavioral, and molecular aspects of nesting Cooper's Hawks. Some of this research was used to complete his Ph.D. in Zoology at North Dakota State University in 1990. His Wisconsin investigations expanded to the prairies of North Dakota and to British Columbia to collaborate on other populations of Cooper's Hawks. He has also conducted research on the possible effects of forest fragmentation on breeding songbirds. Bob has served as a Board Member of the Raptor Research Foundation, and represented this international organization on committees that evaluated the validity of delisting the American Peregrine Falcon, and the proposed listing of the Northern Goshawk, both under the U.S. Endangered Species Act. Rosenfield has published over 110 scientific journal articles, monographs, and technical reports on birds, including over 60 on Cooper's Hawks. His work has been covered in numerous media outlets for the public, including Discovery Channel, National Wildlife, Smithsonian Institute, Birder's World, National Geographic, and Sports Afield. He received the William A. Burnham Memorial Award for Arctic Research, and has also been honored with 12 awards at his campus for distinguished service, and excellence in teaching and scholarship. He is widely recognized as the world's authority on the Cooper's Hawk.