A Story of Medicine in 50 Discoveries: From Mummies to Gene Splicing (History in 50) (Paperback) 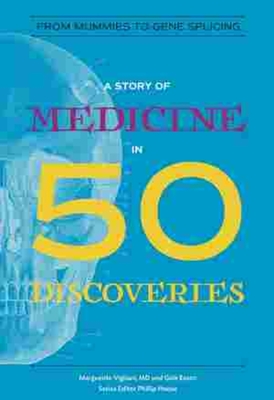 Vigliani and Eaton’s high-interest exploration of medicine begins in prehistory.

The 5,000-year-old Iceman discovered frozen in the Alps may have treated his gallstones, Lyme disease, and hardening of the arteries with the 61 tattoos that covered his body—most of which matched acupuncture points—and the walnut-sized pieces of fungus he carried on his belt. The herbal medicines chamomile and yarrow have been found on 50,000-year-old teeth, and neatly bored holes in prehistoric skulls show that Neolithic surgeons relieved pressure on the brain (or attempted to release evil spirits) at least 10,000 years ago. From Mesopotamian pharmaceuticals and Ancient Greek sleep therapy through midwifery, amputation, bloodletting, Renaissance anatomy, bubonic plague, and cholera to the discovery of germs, X-rays, DNA-based treatments and modern prosthetics, the history of medicine is a wild ride through the history of humankind.

Marguerite Vigliani, MD (Barrington, RI) is Clinical Professor of Obstetrics and Gynecology a tthe Warren Alpert Medical School at Brown University. She has been a private solo OB/GYN practitioner for the last 36 years in Rhode Island, where she lives with her family. She has authored a number of medical case reports and clinical opinions for peer-reviewed journals, and she has taught medical students, residents, and fellows in OB/GYN.

Gale Eaton has spent a lifetime with books for children and young adults, first as a children’s librarian at the Boston Public Library and the Berkshire Athenaeum, and later as a professor of children’s literature at the University of Rhode Island Graduate School of Library and Information Studies. She is the author of four other books.

Phillip Hoose is the widely acclaimed author of books, essays, stories, songs, and articles including the National Book Award - and Newbery Honor - winning book Claudette Colvin: Twice toward Justice and the Boston Globe-Horn Book Honor winner The Boys Who Challenged Hitler: Knud Pedersen and the Churchill Club. A graduate of Indiana University and the Yale School of Forestry and Environmental Sciences, Hoose was for 37 years a staff member of The Nature Conservancy, dedicated to preserving the plants, animals, and natural communities of the Earth.

As part of the History in 50 series, which weaves together discrete historical events, this work focuses on the evolution of medicine and healing modalities since the dawn of humankind. The intriguing story begins with the excavation of the 5,000 B.C. Neolithic man, given the name “Ötzi the Iceman,” who was found with animal skins containing healing medicinal fungi and tattoos on his body that corresponded with specific acupuncture points. The time-traveling thread continues to the Greek islands of Epidauros around 170 BC to the site of the Asklepieion, the temple of healing. Here, patients were encouraged to engage in sleep therapy while the legendary god worked to cure their ailments. Like building blocks through time, the discoveries of innovators such as Florence Nightingale, Joseph Lister, Paul Ehrlich, James Watson and Francis Crick, and Christian Bernard are thoroughly presented. The book even discusses the present-day public health battle against the Zika virus. The narrative is easy to follow and may appeal to young adults, undergraduates and pre-med students, and general readers.

Summing Up: Highly recommended. All readers.

Tackling everything from Ötzi, the Neolithic man who treated his tapeworm with a fungus, to the more recent ((late 20th-century) realization that an extract from the artemisia plant can combat malaria, Vigliani and Eaton examine the history of medicine. The topics are arranged chronologically, and the narrative thoughtfully weaves together the seeming disparate worlds of ancient and modern medicine, reminding readers that current lifesaving advances are often based on the work of ancient medical practitioners, folk medicine traditions, and plant knowledge. Chapters are comprehensible and short (approximately five pages in length) and contain colorful illustrations as well boxes highlighting related subjects of interest.  Chapter end notes and bibliographical sources are extensive.

VERDICT: Bloodletting, organ transplants, the discovery of DNA--it's all here. Those who tackle this book from cover to cover will be rewarded with an understanding of medical progress throughout history, while browsers are sure to return for more. Teachers will find a rich resource likely to spark further student research.

Marguerite Vigliani, MD, distinguished Rhode Island obstetrician gynecologist, and Clinical Professor at the Alpert Medical School of Brown University, has published, with co-author, Gale Eaton, retired professor of children’s literature in the  University of Rhode Island’s graduate school of library and information services, a beautiful book on the history of medicine. In this era of Kindle, e-books and e-magazines, it is a joy to hold in one’s hands a book that not only feels good, with a significant heft to it, but is beautiful to look at, with pleasing print format, wonderful layout, shiny cover and gorgeous illustrations.

It is a history of medicine for middle and high school students, part of a series intended to grab kids’ attention by focusing on 50 exciting stories in history, in this case, the history of medicine. Of course there can not be a consensus on the 50 most important or the 50 most exciting stories, just as there can’t be universal agreement on who should win a Nobel prize each year, but these are wonderful stories. I must admit up front that Marguerite is an old friend, who delivered two of my children, so that my review may be a tad short of “objective,” but this is Rhode Island, where there are way less than 6 degrees of separation.

Marguerite thought that since I’m a neurologist I’d be most interested in the story on trephining, which traced the history of the practice, seen in skulls of people who had survived for many years after the procedure. But I actually liked best the story about Calmette, an early immunologist who will forever be linked with the BCG inoculation against tuberculosis. He was interested in developing an anti-snake venom treatment and was able, in 1894 to purchase a barrel full of cobras from India. As an ardent believer in the balance between evidence and experience based medicine I was taken by the story of al-Razi, a legendary Persian physician in the late 800’s, who apparently published early, if not the earliest, controlled clinical trials. One demonstrated that epileptics who received sneeze therapy had fewer seizures than those who did not, and that bleeding reduced symptoms of presumed meningitis, compared to controls who were not bled. So much for evidenced based medicine. We learn that Leonardo da Vinci lingered by an elderly dying man to perform a dissection as soon as possible. DNA, blood circulation, the discovery of penicillin and 40+ more topics are cleverly discussed, in a straightforward and engaging manner, that encourages the reader to think about the larger issues associated with each of these 50 medical advances.

This will make a great Christmas present for middle school and high school students who might need a little encouragement to learn more about medicine and its history.