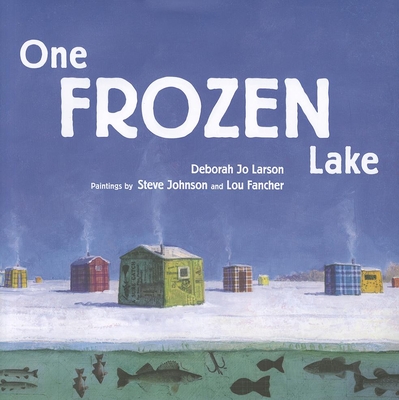 A beautiful family story about a grandfather and grandchild who spend the winter going ice fishing. Captivating illustrations of the world below the frozen surface complement the quiet stories from the ice towns that form above. — Aubrey Restifo

Seven hours pass.
Not one fish.
Has anyone seen a fish?

On the surface, it might seem like ice fishing, with its hours in a tiny shack awaiting an elusive crappie or pike, would not be a great match for kids. However, as scores of grandparents and parents know, this unique northern pastime holds special magic for a child.

One Frozen Lake tells the story of a grandfather and grandchild on several ice-fishing adventures. Ramshackle ice towns sprout up. Ice shack neighbors share piping-hot cocoa and humorous stories. Eye-catching lures and jigs dance at the end of the fishing line. And mysterious, silvery ice tunnels connect the community above with the one below.

Will they ever catch a fish? Perhaps that’s beside the point.

Deborah Jo Larson’s engaging narrative, a celebration of her childhood spent on frozen lakes, comes alive with appealing scenes expertly crafted by award-winning children’s book artists Steve Johnson and Lou Fancher, who create shimmering worlds above and below the ice. One Frozen Lake tells of a tradition being passed from one generation to the next, a tradition that encourages spending unhurried time together sharing winter’s gifts—and creating precious memories that last long after the ice melts.

This is Deborah Jo Larson’s first picture book. Her fiction has appeared in Stories for Children online magazine. Steve Johnson and Lou Fancher have collaborated on over thirty books for children, including Dr. Seuss’s My Many Colored Days and Garrison Keillor’s Cat, You Better Come Home.