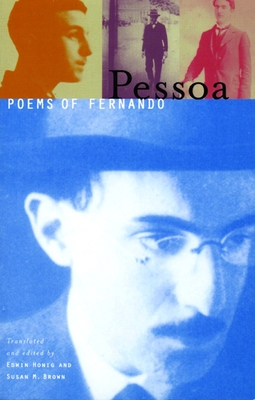 He wrote under several identities, which he called heteronyms: Albet Caeiro, Alvaro de Campos, Ricardo Reis and Bernardo Soares. He wrote fine poetry under his own name as well, and each of his "voices" is completely different in subject, temperament and style. This volume brings back into print the comprehensive collection of his work published by Ecco Press in 1986.

At last, at last, at last, Pessoa again More Pessoa One of the very great poets of the twentieth century, again and more And one of the fascinating figures of all literature, with his manifold identities, his amazing audacities, his brilliance and his shyness. I think I have under control the reluctance I feel in having to share Pessoa with the public he should have had all along in America: until now, only the poets, so far as I can tell, have even heard of him, and delighted and exulted in him. He is, in some ways, the poet of modernism, the only one willing to fracture himself into the parcels of action, anguish, and nostalgia which are the grounds of our actual situation.--C. K. Williams

Pessoa is one of the great originals (a fact rendered more striking by his writing as several distinct personalities) of the European poetry of the first part of this century, and has been one of the last poets of comparable stature, in the European languages, to become known in English. Edwin Honig's translations of Spanish and Portuguese poetry have been known to anyone who cares about either, since his work on Lorca in the forties, and his Selected Poems of Pessoa (1971) was a welcome step toward a long-awaited larger colection.--W. S. Merwin

Fernando Pessoa is the least known of the masters of the twentieth-century poetry. From his heteronymic passion he produced, if that is the word, two of our greatest poets, Alberto Caeiro and lvaro de Campos, and a third, Ricardo Reis, who isn't bad. Pessoa is the exemplary poet of the self as other, of the poem as testament to unreality, proclamation of nothingness, occasion for expectancy. In Edwin Honig's and Susan Brown's superb translations, Pessoa and his 'others' live with miraculous style and vitality.--Mark Strand