How Language Began: The Story of Humanity's Greatest Invention (Hardcover) 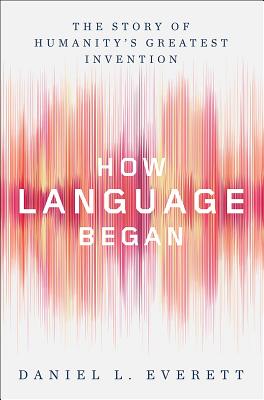 How Language Began revolutionizes our understanding of the one tool that has allowed us to become the "lords of the planet."

Mankind has a distinct advantage over other terrestrial species: we talk to one another. But how did we acquire the most advanced form of communication on Earth? Daniel L. Everett, a “bombshell” linguist and “instant folk hero” (Tom Wolfe, Harper’s), provides in this sweeping history a comprehensive examination of the evolutionary story of language, from the earliest speaking attempts by hominids to the more than seven thousand languages that exist today.

Although fossil hunters and linguists have brought us closer to unearthing the true origins of language, Daniel Everett’s discoveries have upended the contemporary linguistic world, reverberating far beyond academic circles. While conducting field research in the Amazonian rainforest, Everett came across an age-old language nestled amongst a tribe of hunter-gatherers. Challenging long-standing principles in the field, Everett now builds on the theory that language was not intrinsic to our species. In order to truly understand its origins, a more interdisciplinary approach is needed—one that accounts as much for our propensity for culture as it does our biological makeup.

Language began, Everett theorizes, with Homo Erectus, who catalyzed words through culturally invented symbols. Early humans, as their brains grew larger, incorporated gestures and voice intonations to communicate, all of which built on each other for 60,000 generations. Tracing crucial shifts and developments across the ages, Everett breaks down every component of speech, from harnessing control of more than a hundred respiratory muscles in the larynx and diaphragm, to mastering the use of the tongue. Moving on from biology to execution, Everett explores why elements such as grammar and storytelling are not nearly as critical to language as one might suspect.

In the book’s final section, Cultural Evolution of Language, Everett takes the ever-debated “language gap” to task, delving into the chasm that separates “us” from “the animals.” He approaches the subject from various disciplines, including anthropology, neuroscience, and archaeology, to reveal that it was social complexity, as well as cultural, physiological, and neurological superiority, that allowed humans—with our clawless hands, breakable bones, and soft skin—to become the apex predator.

How Language Began ultimately explains what we know, what we’d like to know, and what we likely never will know about how humans went from mere communication to language. Based on nearly forty years of fieldwork, Everett debunks long-held theories by some of history’s greatest thinkers, from Plato to Chomsky. The result is an invaluable study of what makes us human.

Daniel L. Everett is the Dean of Arts and Sciences at Bentley University. He has published over 100 articles and twelve books on linguistic theory, including The Dark Matter of the Mind: The Culturally Articulated Unconscious. He lives in Waltham, Massachusetts.

An ambitious text.... Everett’s amiable tone, and especially his captivating anecdotes from his field studies in the Amazonian rain forests, will help the neophyte get along. It’s worth it in the end to get a glimpse of conversation through his eyes, as humanity’s most impressive collective invention.
— Melissa Dahl, New York Times Book Review

Very few books on the biological and cultural origin of humanity can be ranked as classics. I believe that Daniel L. Everett’s How Language Began will be one of them.

When I first became interested in cultural evolution, cognitive revolutionaries would say that Noam Chomsky had proved that an innate language acquisition device was the key to linguistics. Daniel Everett is a leader of the counterrevolution that is putting culture and cultural evolution back at the center of linguistics, and cognition more generally, where I think it belongs. How Language Began is an accessible account of the case for a culture-centered theory of language.

Moving far outside historical linguistics, Everett credits Homo erectus with having invented language nearly two million years ago. This communicative invention came not—in Everett’s view—in one revolutionary breakthrough but, instead, at the slow pace typical of evolution, as early hominids gradually organized themselves in ever-more-complex social groupings, eventually learning to fashion culturally weighted symbols and then to manipulate such symbols in communicative strings, so setting the evolutionary stage for the planet’s only loquacious species: Homo sapiens. . . . Certain to spark that liveliest form of language—debate!
— Bryce Christensen - Booklist

[Everett] mixes esoteric scholarly inquiry with approachable anecdotal interludes to surmise how humans developed written and spoken language and why it became vital for survival and dominance. As in his previous books, Everett energetically attacks the long-accepted theory of Noam Chomsky that humans are born with the language instinct, including innate rules of structure....That Everett is skilled at leavening an intellectually challenging treatise with humor is evident on the first page of the introduction.
— Kirkus Reviews

Provocative and ambitious. . . . Applying semantics, linguistic theory, cultural history, and popular culture, [Everett] makes a convincing case for the multimodal nature of language--a phenomenon that engages 'the whole person--intellectual emotions, hands, mouth, tongue, brain.' . . . This volume will be of interest to linguists, cultural critics, and anthropologists as well as informed readers interested in the evolution of language.
— Herbert E. Shapiro - Library Journal

How Language Began occupies a rare literary space that explains complex issues clearly to general readers while being an original contribution to scholarship...the arguments he marshals and insights he provides are impressive...anyone interested in language would gain from reading this book.

Ambitious...the subject-matter is completely enthralling...Everett is at the very top of his intellectual game.
— Harry Ritchie - Spectator