Why Does the World Exist?: An Existential Detective Story (Hardcover) 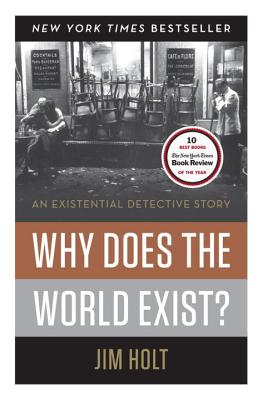 In this astonishing and profound work, an irreverent sleuth traces the riddle of existence from the ancient world to modern times.

Whether framed philosophically as “Why is there a world rather than nothing at all?” or more colloquially as “But, Mommy, who made God?” the metaphysical mystery about how we came into existence remains the most fractious and fascinating question of all time. Following in the footsteps of Christopher Hitchens, Roger Penrose, and even Stephen Hawking, Jim Holt emerges with an engrossing narrative that traces our latest efforts to grasp the origins of the universe. As he takes on the role of cosmological detective, the brilliant yet slyly humorous Holt contends that we might have been too narrow in limiting our suspects to God vs. the Big Bang. Whether interviewing a cranky Oxford philosopher, a Physics Nobel Laureate, or a French Buddhist monk, Holt pursues unexplored and often bizarre angles to this cosmic puzzle. The result is a brilliant synthesis of cosmology, mathematics, and physics—one that propels his own work to the level of philosophy itself.

Jim Holt, a prominent essayist and critic on philosophy, mathematics, and science, is a frequent contributor to the New York Times Book Review and the New York Review of Books. He lives in New York City.

If Jim Holt's deft and consuming Why Does the World Exist?: An Existential Detective Story has anything to tell us, it's that such a comment is less about literary riffing than deep philosophy.

There could have been nothing. It might have been easier. Instead there is something. The universe exists, and we are here to ask about it. Why? In Why Does the World Exist?, Jim Holt, an elegant and witty writer comfortably at home in the problem’s weird interzone between philosophy and scientific cosmology, sets out in search of such answers. ...There is no way to do justice to any of these theories in a brief review, but Holt traces the reasoning behind each one with care and clarity—such clarity that each idea seems resoundingly sensible even as it turns one’s brain to a soup of incredulity.... I can imagine few more enjoyable ways of thinking than to read this book.

Winding its way to no reassuringly tidy conclusion, this narrative ultimately humanizes the huge metaphysical questions Holt confronts, endowing them with real-life significance. A potent synthesis of philosophy and autobiography.

The pleasure of this book is watching the match: the staggeringly inventive human mind slamming its fantastic conjectures over the net, the universe coolly returning every serve.... Holt traffics in wonder, a word whose dual meanings—the absence of answers; the experience of awe—strike me as profoundly related. His book is not utilitarian. You can’t profit from it, at least not in the narrow sense.... And yet it does what real science writing should: It helps us feel the fullness of the problem.
— Kathryn Schulz

A guided tour of ideas, theories and arguments about the origins of the universe…. Through discussions with philosophers of religion and science, humanists, biologists, string theorists, as well as research into the scholarship of days past—from Heidegger, Parmenides, Pythagoras and others—and an interview with John Updike, Holt provides a master's-level course on the theories and their detractors. The interludes find the author positioning himself as an existential gumshoe, but also working through the sudden loss of a pet and, later, the death of his mother. Holt may not answer the question of his title, but his book deepens the appreciation of the mystery.

It’s the mystery William James called “the darkest in all philosophy”: “[W]hy is there something rather than nothing?” For Jim Holt, it is a question that may never find an answer, but one endlessly worth asking. In this highly engaging book, Holt visits great thinkers in mathematics, quantum physics, artificial intelligence, theology, philosophy, and literature. These conversations don’t lead him toward any conclusion, but they make for a lively, thoughtful read, whether your worldview tends toward Spinoza (in which “reality is a self-sustaining causal loop: the world creates us, and we in turn create the world”) or like Stephen Hawking, still searching for the final theory of everything.
— Kate Tuttle

He [Jim Holt] leaves us with the question Stephen Hawking once asked but couldn't answer, ‘Why does the universe go through all the bother of existing?’
— Ron Rosenbaum

In Why Does the World Exist? Mr. Holt picks up this question about being versus nothingness and runs quite a long and stylish way with it. He combines his raffish erudition with accounts of traveling to tap the minds of cosmologists, theologians, particle physicists, philosophers, mystics and others.

… an eclectic mix of theology, cutting-edge science (of the cosmological and particle-physics variety) and extremely abstract philosophising, rendered (mostly) accessible by Mr. Holt’s facility with analogies and clear, witty language.

I’ve [read] Why Does the World Exist? by Jim Holt to get my existential buzz.

A reminder that the quest for foundational truths is not only a supremely human activity but also one that brings us, if not absolute truth (which may be unknowable), at least better and better approximations of the truth… A gifted essayist and critic… Holt intersperses his intellectual investigation with brief but revealing glimpses of his own life, including the death of his mother, when existential musings on the nature of being seem anything but abstract.
— Jay Tolson

[Holt] is a spirited interlocutor and a deft explainer, patiently making sense of subjects ranging from Platonism to quantum mechanics, while nonetheless marveling at their seemingly fantastical nature… This cheerful persistence—combined with anecdotes celebrating the thrills of travel, good food, and drink—helps to sweeten what is, finally, a somber vision, in which reality may take the form of ‘infinite mediocrity’ and ‘the life of the universe, like each of our lives, may be a mere interlude between two nothings.’

The author takes on the origin of everything in this wonderfully ambitious book encompassing mathematics, theology, physics, ethics and more.
— Michael S. Roth

Jim Holt’s Why Does the World Exist?: An Existential Detective Story is a portrait gallery of leading modern philosophers…. Their answers give us vivid glimpses of the speakers… Holt’s philosophers belong to the twentieth and twenty-first centuries… When and why did philosophy lose its bite? How did it become a toothless relic of past glories? These are the ugly questions that Jim Holt’s book compels us to ask.