As Texas Goes...: How the Lone Star State Hijacked the American Agenda (Hardcover) 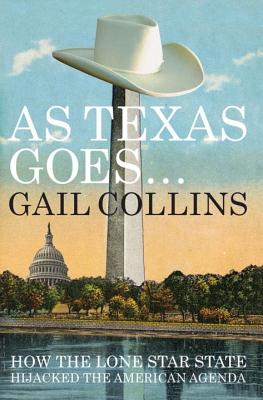 By Gail Collins
Call or email to see if a used copy is available.
Out of Print

My favorite columnist writes a devastating portrait of the Lone Star State and the various traumas its loopy politics inflicts upon the rest of the country. Told with Collins' trademark wit and humor, no small feat because the subject is decidedly not funny. — Alden Graves

In one of the most explosive and timely political books in years, Gail Collins declares that "what happens in Texas doesn't stay in Texas anymore."

Not until she visited Texas, that proud state of big oil and bigger ambitions, did Gail Collins, the best-selling author and columnist for the New York Times, realize that she had missed the one place that mattered most in America’s political landscape. Raised in Ohio, Collins had previously seen the American fundamental divide as a war between the Republican heartland and its two liberal coasts. But the real story, she came to see, was in Texas, where Bush, Cheney, Rove, & Perry had created a conservative political agenda that is now sweeping the country and defining our national identity. Through its vigorous support of banking deregulation, lax environmental standards, and draconian tax cuts, through its fierce championing of states rights, gun ownership, and, of course, sexual abstinence, Texas, with Governor Rick Perry’s presidential ambitions, has become the bellwether of a far-reaching national movement that continues to have profound social and economic consequences for us all. Like it or not, as Texas goes, so goes the nation.

Gail Collins, the best-selling author of When Everything Changed: The Amazing Journey of American Women from 1960 to the Present, is a national columnist for the New York Times. She lives in New York City.

The reader who senses a touch of sarcasm would not be wrong…. [Collins] has a good eye for absurd details.
— Erica Grieder - New York Times

There is no one like Gail Collins: uproarious fun on every page, but with a serious point. In this wonderful book she devastates Texas for its hypocrisy, its ignorance, its worship of wealth. But you cannot keep laughing as she shows how the Texan mind works a baleful influence on the rest of the country.
— Anthony Lewis

Gail Collins is the funniest serious political commentator in America. Reading As Texas Goes… is pure pleasure from page one.

There's no funnier writer about politics than Gail Collins, and in Texas, she's found the perfect canvas. The state's record at producing some of the nuttiest characters ever to enter American public life is matched only by its recent prowess in infecting the other 49 states with those politicians' most crackpot policy ideas. Collins serves up hilarity and horror in equal measure and leaves you rooting for Rick Perry to make good on his threat to lead Texas out of the Union.
— Frank Rich

New York Times columnist Collins revels in the state's 10-gallon self-regard, Alamo-inspired cult of suicidal last stands, and eccentric right-wing pols... Much like the late Texas dissident Molly Ivins, she slathers plenty of wry humor onto a critique that stings like a red-hot brand.

Starred review. New York Times political columnist Collins zeroes in on what makes Texas so important and why the rest of the country needs to know and care about what’s happening there…A timely portrait of Texas delivered with Collins’ unique brand of insightful humor.

[Collins] set off on a whirlwind tour to discover the Lone Star State and its transcendent meaning, deploying a breezy, wisecracking polemical style familiar to fans (including me) of her twice-­weekly column in The Times.

New York Times columnist Gail Collins makes a compelling case in As Texas Goes... that much of what ails the nation began down in the Lone Star State… her larger thesis has a chilling ring of truth. Texas represents a kind of dark bellwether for the rest of the country: a two-tiered society in which the affluent rig the system in their favor while a vast underclass struggles to pay for basic services such as medical care.

Collins lays out a convincing case that many of the nation’s more misguided—sometimes outright wacky—policies originated in Texas, ranging from public education to environmental regulation to teaching kids about sex… Worth a read.
— Deborah Yetter - Louisville Courier-Journal