Mexican: A Journey Through Design (Hardcover) 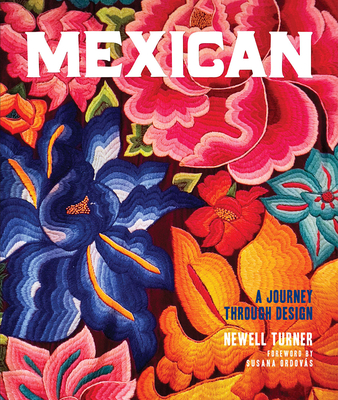 Revealing the richly visual and cultural details that are the essence of Mexican style, design editor and photographer Newell Turner has done for Mexican design what legendary culinary pioneer Diana Kennedy did for Mexican food.

Elegantly organized around nine decisive decorative periods that have shaped México’s unique design journey to the present day, Turner establishes a visual dialogue with the reader that beautifully captures the depth and subtleties of the country’s aesthetic legacy. Ushered behind the walls, gates, and doors of private México, we are introduced to an intriguing world of interior design and architecture—including the highly developed civilizations pre-dating the arrival of Columbus; the Spanish colonial arts; the dynamic response to global movements such as Art Deco and Surrealism; and a rich survey of modernist and contemporary work. Woven intricately into this history is Turner’s own story of discovering the distinctive soul of México, where—in the spirit of memoirs in which a traveler discovers another country—he finds himself along the way.

In this vivid volume of color, texture and contrasts, Turner examines the extraordinary range of Mexican design with the insight of a true devotee. The breathtaking photography shows how every room, courtyard, loggia—and even a chair, or an arrangement of flowers—are part of a rich design heritage. Turner spent his magazine career chronicling American style, and now his unerring eye has turned to México. We are invited to join him on a voyage as he explores the homes of Mexicans and other expats who share his passion for authentic México—both past and present—and are inspired by the country’s complex history and stunning landscapes.

Newell Turner led the formation of the Hearst Design Group in 2012 and served as editorial director of Elle Decor, House Beautiful, and Veranda. As the editor-in-chief of House Beautiful, he won a coveted National Magazine Award for General Excellence—the industry equivalent of an Oscar. Earlier, Turner held senior editorial positions at House & Garden and Metropolitan Home, and was the founding editor of Hamptons Cottages & Gardens and its many sister publications. A trustee of the New York School of Interior Design, he lives in the Catskill region of New York as well as in Mérida, Mexico.

Susana Ordovás is a Mexico City–based journalist and creative director; she is a contributor to AD Mexico and Cabana.