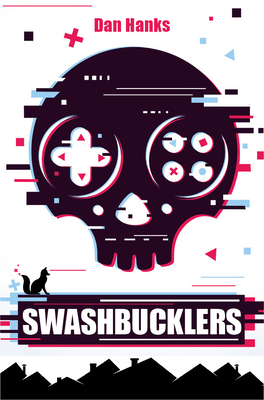 Part fantasy, part adventure, part horror, and a lot of humor cover the pages of this novel. Our hero (question mark) Cisco comes back to his hometown 30-odd years after that Halloween and the "gas leak" which he knows was not any old gas leak. In fact, it was not a gas leak at all, but a dead ghost pirate hell bent on taking over the world. But nobody wants to believe him. Even his best friends from that time. But now their past has caught up with them again when a toy rabbit attacks and kills a man and seeing is believing. Even if the seeing shows talking gnomes, killer stuffed toys and a blow-up Father Christmas attacking the center of the city. Now Cisco and friends (30 years older, parents, and having to do the school runs) are told by a talking fox of all things, they are chosen to fight again. Cisco is all ready to save the world from impending doom. That is, if he has some warning so he can find a babysitter. — Jeanette

When Cisco Collins returns to his home town thirty years after saving it from being swallowed by a hell mouth opened by an ancient pirate ghost, he realises that being a childhood hero isn't like it was in the movies. Especially when nobody remembers the heroic bits – even the friends who once fought alongside him.

Struggling with single parenting and treated as bit of a joke, Cisco isn't really in the Christmas spirit like everyone else. A fact that's made worse by the tendrils of the pirate's powers creeping back into our world and people beginning to die in bizarre ways.

With the help of a talking fox, an enchanted forest, a long-lost friend haunting his dreams, and some 80s video game consoles turned into weapons, Cisco must now convince his friends to once again help him save the day. Yet they quickly discover that being a ghostbusting hero is so much easier when you don't have schools runs, parent evenings, and nativity plays to attend. And even in the middle of a supernatural battle, you always need to bring snacks and wipes...

Dan is a writer, editor, and vastly overqualified archaeologist who has lived everywhere from London to Hertfordshire to Manchester to Sydney, which explains the panic in his eyes anytime someone asks “where are you from?”. Thankfully he is now settled in the rolling green hills of the Peak District with his human family and fluffy sidekicks Indy and Maverick, where he writes books, screenplays and comics.

"Swashbucklers brings all the magic of the 80’s back to life, and delivers a fun, action-packed tale with heart"
–  Fantasy Hive

"The middle-aged heroes of Swashbucklers are definitely getting too old for this shite, but to protect their families and the town they grew up in from the worst fears of their youth, they are game to try.  Dan's page-turning second novel proves it's not always possible – or wise – to put aside childish things. A great read!"
– R.W.W.Greene, author of The Light Years

"Swashbucklers is literally a nostalgia-inducing, pop culture acid-trip where the hometown kids reunite as middle-aged Goonies"
– Patricia A. Jackson, author of Forging a Nightmare

“With Swashbucklers, Dan Hanks puts forty-year-old characters in an action-packed fantastical story designed for the fitness level of teenagers and sees if they can keep up. They can't. And it's an awesome formula for fun.”
– Chris Panatier, author of The Phlebotomist

"Packed with heart, wit, and plenty of action, Swashbucklers is the sequel to all your favorite childhood adventures. Hanks at the top of his game!"
– Reese Hogan, author of Shrouded Loyalties

“Swashbucklers is a reminiscent romp through the 80’s, filled with retro-goodness. If you’re enamored by the age of video arcades and MTV, you will feel an instant camaraderie with the heroes in this book, who seek to defeat the same evil that almost destroyed their world as children. In Swashbucklers, Hanks has done a lovely job at giving us a villian to hate and a lovable group of aging heroes to cheer on.”
– Ginger Smith, author of The Rush’s Edge

“A team of world-saving teenage misfits is again called upon in their middle age to once more face the nightmare-inducing villain, while juggling school runs, work and housework. Hilarious and poignant, loved it!”
– Gabriela Houston, author of The Second Bell

"It's discovering a box of memories tucked away in your attic. It's sipping tipple from your teenage years under a blanket. It's watching fireworks in your favourite jumper. It reads like Stephen King on steroids. Stranger Things meets It meets The Goonies. I want to hear this story told late at night over a campfire, while the marshmallows go all gooey. "
– Caroline Hardaker, author of Composite Creatures

"It's a giddy, white-knuckled ride to the very end.”
– R.W.W. Greene author of The Light Years

"So cinematic, you can taste the buttered popcorn."
–  S.A. Sidor, author of Fury from the Tomb

"Move over Indiana Jones, Captain Moxley has arrived and she won’t ask you twice!"
– Amanda Bridgeman, author of The Subjugate

"Buckle up and enjoy the ride!"
– Michael J. Martinez, author of The Daedalus Incident

"Hanks forces us to suspend reality, embrace the chaotic ride and revel in the fun-factor."
- Fantasy Faction

"Rolls along at break-neck pace...like a novelisation of a hit movie you never saw"
- Starburst Magazine


"References to contemporary political issues sit alongside nostalgic name drops of Ghostbusters, Star Wars, and The Goonies. The '80s trivia strikes a similar vibe to Ready Player One (2011), but here it’s a window into the fantastical worlds that sit alongside our own. A heartfelt, wacky tale beginning a potential series for fans of Stephen King's IT (1986) and anyone who’s wondered why there are so many unsupervised children in fantasy."
– Booklist

"A fun romp, ideal for fans of the cultural references and humor of Ghostbusters and Ernest Cline’s Ready Player One."
– Library Journal