Traveling Light: Releasing the Burdens You Were Never Intended to Bear (Paperback) 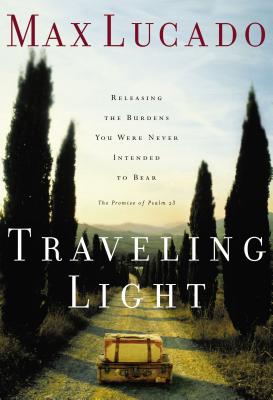 We're all weighed down by loads we were never intended to carry. With New York Times bestselling author and pastor Max Lucado as your guide, Traveling Light invites you to release some of those heavy burdens and experience true rest.

We've all seen weary travelers--everything they own crammed into their luggage, staggering through terminals and hotel lobbies with overstuffed suitcases, trunks, duffels, and backpacks. Backs ache. Feet burn. Eyelids droop. We've all seen people like that; at times, we all are people like that--if not with our physical luggage, then at least with our spiritual load.

The suitcase of guilt. A sack of discontent. You drape a duffel bag of weariness on one shoulder and a hanging bag of grief on the other. Add on a backpack of doubt, an overnight bag of loneliness, and a trunk of fear. Pretty soon you're pulling more stuff than a skycap. No wonder you're so tired at the end of the day. Lugging luggage is exhausting.

Centered around the comforting, uplifting words of Psalm 23, Traveling Light will give you the encouragement and the tools you need to release the burdens of:

There are certain weights in life that we simply aren't designed to carry, and Max reminds us that the Lord is asking you to set them down and trust him. He is the father at the baggage claim. When a dad sees his five-year-old son trying to drag the family trunk off the carousel, what does he say? The father will say to his son what God is saying to you.

What if we took God up on his offer? We just might find ourselves traveling a little lighter.