George Stacey and the Creation of American Chic (Hardcover) 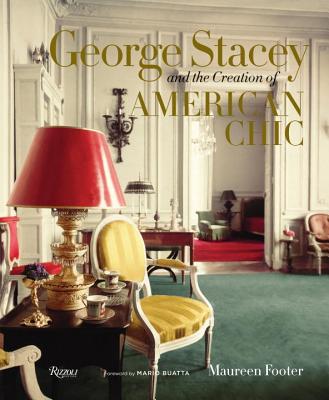 The history of interior design is punctuated by a few legends-Billy Baldwin, Sister Parish-and should include trailblazing decorator George Stacey. When George Stacey shot to prominence in the 1930s with projects for socialite Frances Cheney and style priestess Diana Vreeland, the audacity of his work caught the eye of Vogue, Harper's Bazaar, Town and Country, and House & Garden. An appealing nonchalance and irreverence, combined with erudition, a flair for color, and an innate grasp of balance, scale, and proportion, produced rooms that were surprising as well as sophisticated. Balancing modern aesthetics and modern living with a lifelong passion for French classicism ensured that Stacey designs were both of the moment and enduring.

For the next forty years, he deftly produced a string of stylish rooms for his stylish clientele. While the ground rules of Stacey's approach remained constant, he captured the nuances of mood and culture of an exceptionally dynamic era and established a design vocabulary that defined American chic in the American century and that endures, glitteringly, to this day.

Maureen Footer studied French decorative arts and design at the Ecole du Louvre. She worked at McMillen Inc. and Molyneux before establishing her own design firm. Legendary American decorator Mario Buatta is internationally renowned for his "Undecorated Look."

"It should be on every serious design student's shelf, designers-and the would be as well." -Little Augury

"The first book devoted to Stacey and his undisputed influence..." -W Magazine

“…a wonderful new book…George Stacey and the Creation of American Chic, will be a 'Must Have' for all interested in influential twentieth century interior design. Most of the book is devoted to showing and discussing the work of the talented Mr. Stacey. Great praise is due Maureen Footer for her research, providing extensive and informative End Notes (far too uncommon these days) and a wealth of interesting photographs. One theme that is repeated several times was the exceptional interiors Stacey created for particularly stylish female clients. In addition, the book goes into detail to present the homes, usually plural, of several clients who were confident enough to receive the full benefit of Stacey's talent. It is a well-crafted presentation of George Stacey, the man who brought a stylish, contemporary twist on traditional decoration, a talent just as desirable today as it was eighty five years ago.” –The Devoted Chassicist

“Although my knowledge about interior design is very limited, I found the book stimulating as a visual social history of the era during the years of the Great Depression and the years following the Second World War. Plus, it’s just a beautiful book." -New York Social Diary

"This extravagant volume is the first on one of the most brilliant—and sparsely documented—decorators of the 20th century." -Gotham Magazine

"George Stacey had a lasting impact on 20th-centry decorating—in addition to an impressive client list." -New York Cottages and Gardens

"His vision defined the backdrop of Café Society and continues to reverberate to this day." -Veranda

"...the book stimulating as a visual social history of the era during the years of the Great Depression and the years following the Second World War. Plus, it’s just a beautiful book." -New York Social Diary

“...sumptuous book, with its scarlet endpapers…there are beautiful pictures of rooms he did for the likes of Babe Paley, Diana Vreeland…” –WWD

“George Stacey and the Creation of American Chic is a must-read addition to your design Library…You’ll be glad you did!” –Ladue News

“Thanks to Maureen Footer who immersed herself in ALL things George Stacey for four years, we now have the most tremendous Rizzoli tome George Stacey and the Creation of American Chic celebrating Stacey and his career. This is a must-read for up and coming designers…” –What is James Wearing?