Left in the Midwest: St. Louis Progressive Activism in the 1960s and 1970s (Paperback) 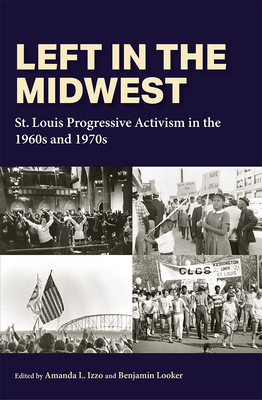 Despite St. Louis’s mid-twentieth-century reputation as a conservative and sleepy midwestern metropolis, the city and its surrounding region have long played host to dynamic forms of social-movement organizing. This was especially the case during the 1960s and 1970s, when a new generation of local activists lent their energies to the ongoing struggles for Black freedom, lesbian and gay liberation, feminist social transformations, environmental protection, an end to the Vietnam War, and more. This volume, the first of its kind, offers fifteen scholarly contributions that together bring into focus the exceptional range of progressive activist projects that took shape in a single midwestern city during these tumultuous decades.

In contrast to scholarship that seeks to interpret the era’s social-movement initiatives in a primarily national context, the works presented in this expansive collection emphasize the importance of locality, neighborhood, community institutions, and rooted social networks. Documenting wrenching forces of metropolitan change as well as grassroots resilience, Left in the Midwest shows us how place powerfully shaped agendas, worldviews, and opportunities for the disparate groups that dedicated themselves to progressive visions for their city. By revising our sense of the region’s past, this volume also expands our sense of the possibilities that the future may hold for activist movements seeking change in St. Louis and beyond.

Amanda L. Izzo is an associate professor of Women’s and Gender Studies at Saint Louis University. A scholar of US women’s history, she received her PhD from the American Studies program of Yale University. She is the author of Liberal Christianity and Women’s Global Activism: The YWCA of the USA and the Maryknoll Sisters.

Benjamin Looker is an associate professor of American Studies at Saint Louis University, with a PhD in American Studies from Yale University. His most recent book, A Nation of Neighborhoods: Imagining Cities, Communities, and Democracy in Postwar America, was a recipient of “best-book” awards from organizations including the American Studies Association and the Urban History Association.

“While historical in nature, this book is very timely. At a time when cities are crumbling and facing similar social justice and economic issues, this book will help a new generation of activists and leaders to figure out the best strategies to effect change.”—Jas Sullivan, Louisiana State University, co-author of Dimensions of Blackness: Racial Identity and Political Beliefs

“An important corrective to common assumptions about the undisturbed conservatism of St. Louis, according to which the Ferguson uprising ‘came out of nowhere,’ and also an excellent, more general roadmap of progressive politics in the United States in the mid-twentieth century. Izzo and Looker’s collection will richly repay the attentive reader; its conceptual reach far exceeds the progressive politics of this one midwestern city.”—Matthew Frye Jacobson, Yale University, author of Dancing Down the Barricades: Sammy Davis, Jr. and the Long Civil Rights Era


“In addition to offering more than a dozen great stories of life in the Gateway City, Left in the Midwest presents two lessons useful to historians and activists from any city, anywhere: first, a savvy untangling of the intertwined networks of people who worked to promote social, political, racial, and gender equality in postwar America; second, a model for putting left and liberal activism ‘in its place’—in this case, the streets and neighborhoods in which citizens worked, played, and worshipped as they struggled to build a better world.”—Eric Sandweiss, Indiana University, author of St. Louis: The Evolution of an American Urban Landscape