Your Brother in Arms: A Union Soldier's Odyssey (Shades of Blue and Gray #1) (Paperback) 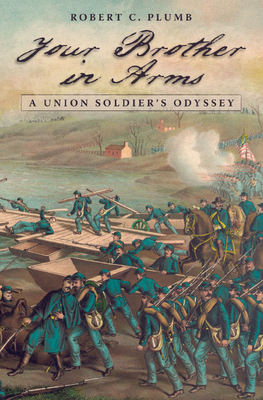 George P. McClelland, a member of the 155th Pennsylvania Infantry in the Civil War, witnessed some of the war’s most pivotal battles during his two and a half years of Union service. Death and destruction surrounded this young soldier, who endured the challenges of front line combat in the conflict Lincoln called “the fiery trial through which we pass.” Throughout his time at war, McClelland wrote to his family, keeping them abreast of his whereabouts and aware of the harrowing experiences he endured in battle. Never before published, McClelland’s letters offer fresh insights into camp life, battlefield conditions, perceptions of key leaders, and the mindset of a young man who faced the prospect of death nearly every day of his service. Through this book, the detailed experiences of one soldier—examined amidst the larger account of the war in the eastern theater—offer a fresh, personal perspective on one of our nation’s most brutal conflicts.             Your Brother in Arms follows McClelland through his Civil War odyssey, from his enlistment in Pittsburgh in the summer of 1862 and his journey to Washington and march to Antietam, followed by his encounters in a succession of critical battles: Fredericksburg, Chancellorsville, Gettysburg, Spotsylvania Court House, the North Anna River, Petersburg, and Five Forks, Virginia, where he was gravely injured. McClelland’s words, written from the battlefield and the infirmary, convey his connection to his siblings and his longing for home. But even more so, they reflect the social, cultural, and political currents of the war he was fighting. With extensive detail, Robert C. Plumb expounds on McClelland’s words by placing the events described in context and illuminating the collective forces at play in each account, adding a historical outlook to the raw voice of a young soldier.             Beating the odds of Civil War treatment, McClelland recovered from his injury at Five Forks and was discharged as a brevet-major in 1865—a rank bestowed on leaders who show bravery in the face of enemy fire. He was a common soldier who performed uncommon service, and the forty-two documents he and his family left behind now give readers the opportunity to know the war from his perspective.             More than a book of battlefield reports, Your Brother in Arms: A Union Soldier’s Odyssey is a volume that explores the wartime experience through a soldier’s eyes, making it an engaging and valuable read for those interested in American history, the Civil War, and military history.

Robert C. Plumb held corporate marketing positions in two Fortune 500 companies and is a marketing consultant to a non-profit organization and a government agency in the health field.  He lives outside Washington, DC.

“As the title infers, Your Brother in Arms: A Union Soldier's Odyssey, conveys the experiences of an enthusiastic 19-year-old volunteer. George P. McClelland joined the army with a group of his friends, nicknamed the ‘Luny Crowd,’ in August 1862. (McClelland rose to the rank of brevet major in 1865.) Author Richard C. Plumb has assembled a rich history from letters McClelland wrote (primarily to his two sisters) that shares his insights as a common soldier during his two-and-a-half years with the 155th Pennsylvania Infantry Regiment….Your Brother in Arms is well worth your time to read.”—Military Review

"The McClelland letters are good, informative, substantive primary sources. They contain insights into the sentiments and services of a citizen-soldier who rose from private to captain in the 155th Pennsylvania, a famous fighting regiment of the Army of the Potomac, 1862-1865."—Richard J. Sommers, author of Richmond Redeemed: The Siege at Petersburg

“[Your Brother in Arms] flows along at an engaging pace, always giving the reader a keen feel and understanding of McClelland’s perceptions and psyche. That these letters were penned by a young man still in his teens and then early 20s stuns the reader. Thoroughly researched and presented, this important collection will appeal to even the most seasoned armchair general. It reflects the outstanding efforts of McClelland, Plumb and the University of Missouri Press.”—Paul Taylor, Civil War News, January 2012

"Your Brother in Arms is an excellent resource for those interested in the 155th Pennsylvania, as well as a useful material on the Army of the Potomac in general. Of specific interest, and as the heart of the book, are McClelland's letters. They range from evocative and philosophical to whimsical and heart-wrenching, and are full of rich content. They help us understand not only McClelland the soldier, but also of more importance, McClelland the man."—Scott Mingus, Cannonball