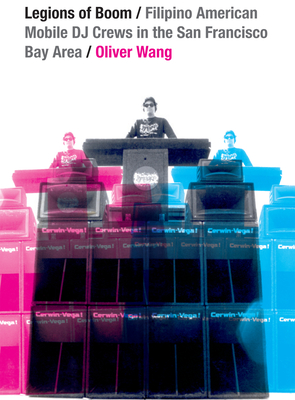 Armed with speakers, turntables, light systems, and records, Filipino American mobile DJ crews, such as Ultimate Creations, Spintronix, and Images, Inc., rocked dance floors throughout the San Francisco Bay Area from the late 1970s through the mid-1990s. In Legions of Boom noted music and pop culture writer and scholar Oliver Wang chronicles this remarkable scene that eventually became the cradle for turntablism. These crews, which were instrumental in helping to create and unify the Bay Area's Filipino American community, gave young men opportunities to assert their masculinity and gain social status. While crews regularly spun records for school dances, weddings, birthdays, or garage parties, the scene's centerpieces were showcases-or multi-crew performances-which drew crowds of hundreds, or even thousands. By the mid-1990s the scene was in decline, as single DJs became popular, recruitment to crews fell off, and aspiring scratch DJs branched off into their own scene. As the training ground for a generation of DJs, including DJ Q-Bert, Shortkut, and Mix Master Mike, the mobile scene left an indelible mark on its community that eventually grew to have a global impact.

Oliver Wang is Associate Professor of Sociology at California State University, Long Beach. He is the editor of Classic Material: The Hip-Hop Album Guide and has written for NPR, Vibe, Wax Poetics, the Los Angeles Times, the Oakland Tribune, and the Village Voice, amongst others.