Our Founders' Warning: The Age of Reason Meets the Age of Trump (Hardcover) 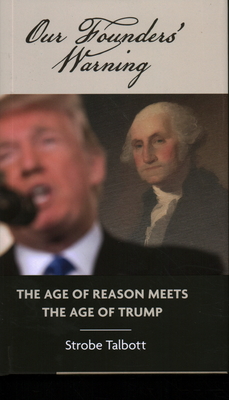 By Strobe Talbott
$24.99
Click Title for IN STORE Location

The presidency of Donald Trump has wreaked havoc on American democracy, divided American society, unsettled foreign allies and partners, and heartened dictators around the world. The damage at home and abroad is likely to cast a long shadow into the future. Trump has also defiled the past, most notably America's origin and its soul.

The Founders counted on their successors to protect and perfect their prodigy with its fundamental ideals, laws, and procedures. They also aspired to a code of personal morals and character. Paramount were honesty, rationality, empathy, and responsibility to the citizenry.

These liberal, revolutionary criteria for public service and leadership derived from the European Enlightenment. The spirit of that movement and its American version is alien to Trump, and many of his predecessors would find him abhorrent and dangerous.

Strobe Talbott tells that story from the vantage of the Age of Trump, bringing out the stark contrast between the 45th president and the first six--Washington, Adams, Jefferson, Madison, Monroe, John Quincy Adams, who were children of the Age of Reason.

Amid myriad books on the Trump phenomenon in these dark days, Talbott shines a light on our history in hope that the Founders' legacy, now in peril, will be vindicated.

Strobe Talbott is a scholar in the Foreign Policy program at the Brookings Institution. Talbott, whose career spans journalism, government service, and academe, is an expert on U.S. foreign policy, with specialties on Europe, Russia, South Asia, and nuclear arms control.