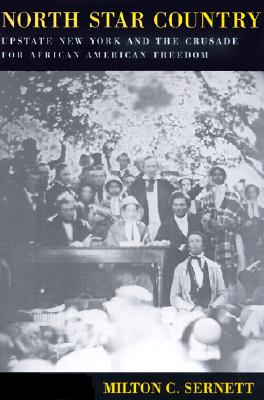 By Milton Sernett
$19.95
IN WAREHOUSE - Usually Ships in 1-5 Business Days

The compelling and wide-ranging tale that examines the moral choices made by blacks and whites of New York State to aid the newly freed slaves to secure the promise of freedom. The North Star was both an astronomical reference guiding slaves north to freedom, and a symbol of the moral enterprise that sought to end slavery. This crusade for freedom in the north was born of the religious revivals of the 1820s and 1830s in central and western New York - known as the Burned-Over District, which lit the fires that eventually burst into the conflagration of the Civil War. Milton C. Sernett begins with a history of slavery in upstate New York and ends with John Brown's execution and burial in the Adirondacks. He includes great abolitionists - among them Harriet Tubman, Frederick Douglass, Gerrit Smith, Beriah Green, Jermain Lougen, and Samuel May - and many lesset-known characters who rescued fugitives from slave hunters, maintained safe houses along the Underground Railroad, and otherwise furthered the cause of freedom.