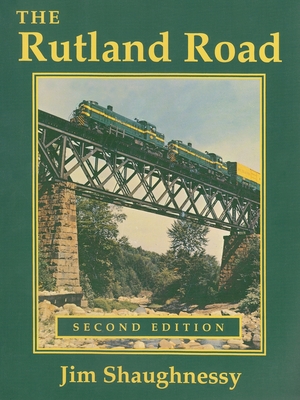 By Jim Shaughnessy
$39.95
Click Title for IN STOCK Location

Jim Shaughnessy is well known throughout the rail fan community as one of the premier scholars of New England Railroading. Jim manages to marry fine attention to detail and technical accuracy in a book which is accessible to all. The Rutland Road is a book that anyone interested in the unique and fascinating story of one of America's most storied roads should pick up. It is the definative short work on the Rutland Railroad and it is also a pleasure to read. — Cheryl Cornwell

One would be challenged to find a railroad to compare scenically and historically with the Rutland Railroad. With Yankee persistence, it struggled for its existence in the snows of Vermont and northern New York for more than one hundred years. Running through territory amply covered by larger and stronger lines, it survived bankruptcy, receivership, flood, unequal competition, seizure, depression, and strikes. Its vestigial remains operate in a small area to this day.

Jim Shaughnessy--award-winning railroad photographer and authority--discusses the Rutland's entire history thoroughly, from preconstrnction in 1831 to the present. In this updated edition, the author covers the history of the three lines that continued to operate after the demise of the Rutland Railroad-the Vermont Railway, the Green
Mountain Railroad, and the Ogdensburg Bridge and Port Authority. Lavishly illustrated with more than 500 incomparable photographs (including those by railroad photographer Philip R. Hastings), The Rutland Road has other features for the railroad enthusiast and historian alike: maps, charts, reproductions of advertisements, a detailed index with engine rosters, a chronology of the Rutland Railroad, and other significant statistical information.

Jim Shaughnessy derived his interest in railroading from an uncle who once worked for the D&H. A railroad photographer for nearly four decades, he has an eye for composition which results in photographs that not only feature trains' mechanical details but also give consideration to the total interaction between the train, its surroundings, and the human aspect of the overall scene. Night photography is his special favorite, and Mr. Shaughnessy is renowned for his pioneering work in that field. He has contributed widely to periodicals such as Trains, Railfan, Adirondack Life, and Down East. In 1987 Mr. Shaughnessy was given the coveted Photography Award from the prestigious Railway & Locomotive Historical Society. He is a licensed professional engineer with a degree from the Rensselaer Polytechnic Institute, has taught civil engineering at the Hudson Valley Community College for ten years, and retired in 1995 as the director of environmental health for Rensselaer County. He resides in Troy, New York, with his wife, the former Carol McNaughton, and his son, James Donald, also a civil engineer.