From Africa to America: Religion and Adaptation Among Ghanaian Immigrants in New York (Hardcover) 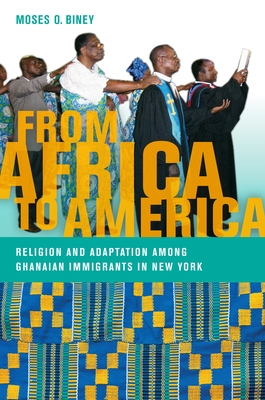 Upon arrival in the United States, most African immigrants are immediately subsumed under the category "black." In the eyes of most Americans--and more so to American legal and social systems--African immigrants are indistinguishable from all others, such as those from the Caribbean whose skin color they share. Despite their growing presence in many cities and their active involvement in sectors of American economic, social, and cultural life, we know little about them.
In From Africa to America, Moses O. Biney offers a rare full-scale look at an African immigrant congregation, the Presbyterian Church of Ghana in New York (PCGNY). Through personal stories, notes from participant observation, and interviews, Biney explores the complexities of the social, economic, and cultural adaptation of this group, the difficult moral choices they have to make in order to survive, and the tensions that exist within their faith community. Most notably, through his compelling research Biney shows that such congregations are more than mere "ethnic enclaves," or safe havens from American social and cultural values. Rather, they help maintain the essential balance between cultural acclimation and ethnic preservation needed for these new citizens to flourish.