Laughter After: Humor and the Holocaust (Paperback) 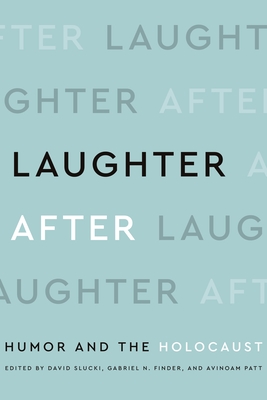 Laughter After: Humor and the Holocaust argues that humor performs political, cultural, and social functions in the wake of horror. Co-editors David Slucki, Gabriel N. Finder, and Avinoam Patt have assembled an impressive list of contributors who examine what is at stake in deploying humor in representing the Holocaust. Namely, what are the boundaries? Clearly, there have been comedy and laughter in the decades since. However, the extent to which humor can be ethically deployed in representing and discussing the Holocaust is not as clear. This book comes at an important moment in the trajectory of Holocaust memory. As the generation of survivors continues to dwindle, there is great concern among scholars and community leaders about how memories and lessons of the Holocaust will be passed to future generations. Without survivors to tell their stories, to serve as constant reminders of what they experienced, how will future generations understand and relate to the Shoah?

Laughter After is divided into two sections: "Aftermath" and "Breaking Taboos." The contributors to this volume examine case studies from World War II to the present day in considering and reconsidering what role humor can play in the rehabilitation of survivors, of Jews and of the world more broadly. More recently, humor has been used to investigate the role that Holocaust memory plays in contemporary societies, while challenging memorial conventions around the Holocaust and helping shape the way we think about the past. In a world in which Holocaust memory is ubiquitous, even if the Holocaust itself is inadequately understood, it is perhaps not surprising that humor that invokes the Holocaust has become part of the memorial landscape. This book seeks to uncover how and why such humor is deployed, and what the factors are that shape its production and reception. Laughter After will appeal to a number of audiences-from students and scholars of Jewish and Holocaust studies to academics and general readers with an interest in media and performance studies.

David Slucki is the Loti Smorgon Associate Professor in Contemporary Jewish Life and Culture at Monash University and author of Sing This at My Funeral: A Memoir of Fathers and Sons (Wayne State University Press, 2019). Gabriel N. Finder is professor in the Department of Germanic Languages and Literatures and director of the Jewish Studies Program at the University of Virginia and co-editor of Jewish Honor Courts: Revenge, Retribution, and Reconciliation in Europe and Israel after the Holocaust (Wayne State University Press in association with the United States Holocaust Memorial Museum, 2015); and currently writing a book on Polish Jewish honor courts. Avinoam Patt is the Doris and Simon Konover Professor of Judaic Studies and director of the Center for Judaic Studies and Contemporary Jewish Life at the University of Connecticut; and co-editor of The JDC at 100: A Century of Humanitarianism (Wayne State University Press, 2019); and is currently writing a new book on the early postwar memory of the Warsaw Ghetto Uprising.