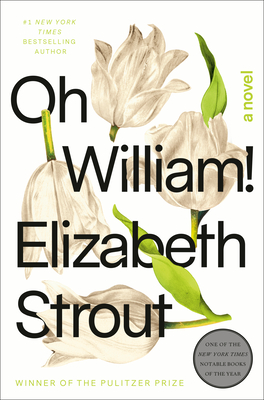 For readers familiar with Ms. Strout's previous two novels, Oh William! will seem like sitting down with an old friend. Lucy Barton is one of those rare people with whom you feel that no experience is too painful or personal to discuss. She emerged from the nightmare of her childhood into the unsettled life of a celebrated writer who was once married to William, an emotionally distant and chronically unfaithful man. The new novel begins after the death of Lucy's second husband and the collapse of William's third marriage, when his unexpected dependence forces an awareness of her own strength and a reevaluation of the beliefs that have sustained her. Lucy is one of the most unsparingly honest characters in contemporary literature. In her struggles, failings, and doubts, we recognize ourselves.

“With sparse and familiar prose, Elizabeth Strout tells the story of Lucy’s ex-husband, William, as he navigates late-in-life changes, revealing deeper truths about how past and present combine to make us who we are. A wonderful novel.”
— Courtney Flynn, Trident Booksellers & Cafe, Boston, MA

NEW YORK TIMES BESTSELLER • Pulitzer Prize winner Elizabeth Strout explores the mysteries of marriage and the secrets we keep, as a former couple reckons with where they’ve come from—and what they’ve left behind.

“Elizabeth Strout is one of my very favorite writers, so the fact that Oh William! may well be my favorite of her books is a mathematical equation for joy. The depth, complexity, and love contained in these pages is a miraculous achievement.”—Ann Patchett, author of The Dutch House

I would like to say a few things about my first husband, William.

Lucy Barton is a writer, but her ex-husband, William, remains a hard man to read. William, she confesses, has always been a mystery to me. Another mystery is why the two have remained connected after all these years. They just are.

So Lucy is both surprised and not surprised when William asks her to join him on a trip to investigate a recently uncovered family secret—one of those secrets that rearrange everything we think we know about the people closest to us. What happens next is nothing less than another example of what Hilary Mantel has called Elizabeth Strout’s “perfect attunement to the human condition.” There are fears and insecurities, simple joys and acts of tenderness, and revelations about affairs and other spouses, parents and their children. On every page of this exquisite novel we learn more about the quiet forces that hold us together—even after we’ve grown apart.

At the heart of this story is the indomitable voice of Lucy Barton, who offers a profound, lasting reflection on the very nature of existence. “This is the way of life,” Lucy says: “the many things we do not know until it is too late.”

Elizabeth Strout is the #1 New York Times bestselling author of Olive, Again; Anything Is Possible, winner of the Story Prize; My Name Is Lucy Barton; The Burgess Boys; Olive Kitteridge, for which she was awarded the Pulitzer Prize; Abide with Me; and Amy and Isabelle, winner of the Los Angeles Times Art Seidenbaum Award and the Chicago Tribune Heartland Prize. She has also been a finalist for the PEN/Faulkner Award and the Orange Prize in London. She lives in Maine.

“Loneliness and betrayal, themes to which the Pulitzer Prize–winning Strout has returned throughout her career, are ever present in this illuminating character-driven saga. . . . Strout’s characters teem with angst and emotion, all of which [she] handles with a mastery of restraint and often in spare, true sentences. . . . It’s not for nothing that Strout has been compared to Hemingway. In some ways, she betters him.”—Publishers Weekly (starred review)

“Strout managed to make me love this strange woman I’d never met, who I knew nothing about. What a terrific writer she is.”—Zadie Smith

“Strout animates the ordinary with an astonishing force. . . . [She] makes us experience not only the terrors of change but also the terrifying hope that change can bring: she plunges us into these churning waters and we come up gasping for air.”—The New Yorker

“Writing of this quality comes from a commitment to listening, from a perfect attunement to the human condition, from an attention to reality so exact that it goes beyond a skill and becomes a virtue.”—Hilary Mantel

“Reading an Elizabeth Strout novel is like peering into your neighbor’s windows. . . . There is a nuanced tension in the novel, evoked by beautiful and detailed writing. Strout’s manifestations of envy, pride, guilt, selflessness, bigotry and love are subtle and spot-on.”—Minneapolis Star Tribune

“Strout is a brilliant chronicler of the ambiguity and delicacy of the human condition.”—The Guardian