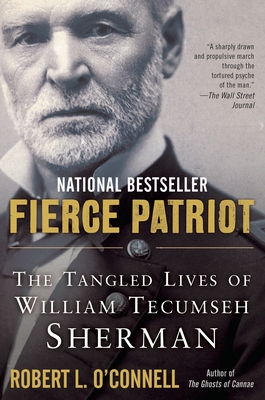 Approaching Sherman from three different angles, O'Connell has written a biography that reveals the complexities of the General, as not only a commander but as a civilian and family man. Fast moving and absorbing. — Sarah Donner

NATIONAL BESTSELLER • William Tecumseh Sherman was more than just one of our greatest generals. Fierce Patriot is a bold, revisionist portrait of how this iconic and enigmatic figure exerted an outsize impact on the American landscape—and the American character.

America’s first “celebrity” general, William Tecumseh Sherman was a man of many faces. Some were exalted in the public eye, others known only to his intimates. In this bold, revisionist portrait, Robert L. O’Connell captures the man in full for the first time. From his early exploits in Florida, through his brilliant but tempestuous generalship during the Civil War, to his postwar career as a key player in the building of the transcontinental railroad, Sherman was, as O’Connell puts it, the “human embodiment of Manifest Destiny.” Here is Sherman the military strategist, a master of logistics with an uncanny grasp of terrain and brilliant sense of timing. Then there is “Uncle Billy,” Sherman’s public persona, a charismatic hero to his troops and quotable catnip to the newspaper writers of his day. Here, too, is the private Sherman, whose appetite for women, parties, and the high life of the New York theater complicated his already turbulent marriage. Warrior, family man, American icon, William Tecumseh Sherman has finally found a biographer worthy of his protean gifts. A masterful character study whose myriad insights are leavened with its author’s trademark wit, Fierce Patriot will stand as the essential book on Sherman for decades to come.

“A superb examination of the many facets of the iconic Union general.”—General David Petraeus

“Sherman’s standing in American history is formidable. . . . It is hard to imagine any other biography capturing it all in such a concise and enlightening fashion.”—National Review

“A sharply drawn and propulsive march through the tortured psyche of the man.”—The Wall Street Journal

“[O’Connell’s] narrative of the March to the Sea is perhaps the best I have ever read.”—Jonathan Yardley, The Washington Post

Robert L. O’Connell received a Ph.D. in history at the University of Virginia, and spent thirty years as a senior analyst at the National Ground Intelligence Center. He is presently a visiting professor at the Naval Postgraduate School, and was a contributing editor to MHQ: The Quarterly Journal of Military History. He is the author of numerous books, including The Ghosts of Cannae: Hannibal and the Darkest Hour of the Roman Republic; Of Arms and Men: A History of War, Weapons, and Aggression; and Soul of the Sword: An Illustrated History of Weaponry and Warfare from Prehistory to the Present.

“A superb examination of the many facets of the iconic Union general who emerged as Ulysses S. Grant’s most trusted battlefield commander. [Robert L.] O’Connell’s biography of Sherman brings to life an enigmatic, fascinating figure who emerged a brilliant strategist and a master of maneuver, and whose victories in 1864 helped to ensure Abraham Lincoln’s re-election and ultimately turned the tide of the Civil War.”—General David Petraeus, Politico

“Sherman’s standing in American history is formidable. . . . It is hard to imagine any other biography capturing it all in such a concise and enlightening fashion.”—National Review

“A sharply drawn and propulsive march through the tortured psyche of the man.”—The Wall Street Journal

“[O’Connell’s] narrative of the March to the Sea is perhaps the best I have ever read.”—Jonathan Yardley, The Washington Post

“William Tecumseh Sherman is one of the great characters in American history—protean, highly effective, cunning, outrageous, and in every way memorable. He has found just the right biographer in Robert L. O’Connell. Fierce Patriot is a surprising, clever, wise, and powerful book.”—Evan Thomas, author of Ike’s Bluff: President Eisenhower’s Secret Battle to Save the World

“For those who think they know a lot about William Tecumseh Sherman, this book will be a revelation. Those who are meeting him for the first time will be equally mesmerized.”—Thomas Fleming, author of A Disease in the Public Mind: A New Understanding of Why We Fought the Civil War

“To his family and friends he was Cump; to his soldiers he was Uncle Billy; to generations of Southern whites he was the devil incarnate. But to biographer Robert L. O’Connell, William T. Sherman was the quintessential nineteenth-century American: full of energy, constantly on the move, pragmatic, adaptable, determined to overcome all obstacles, a nationalist and patriot who teamed with Grant and Lincoln to win the Civil War and launch America as a world power. This readable biography offers new insights on Sherman as a husband and father as well as a master strategist and leader.”—James M. McPherson, Pulitzer Prize–winning author of Battle Cry of Freedom: The Civil War Era

“A fascinating dissection of the multifaceted lives of William Tecumseh Sherman—military genius, brilliant organizer, inspired observer, and occasionally wayward husband. Sherman, O’Connell reminds us, was as brilliantly unpredictable on the battlefield as he was off it.”—Victor Davis Hanson, The Hoover Institution, author of The Soul of Battle and Ripples of Battle

“William Tecumseh Sherman has to be our premier grand strategist, who set unexpectedly bold boundaries, not just for war but for peace, and kept to them. In Fierce Patriot, Robert L. O’Connell has fashioned a remarkable, and remarkably original, portrait of one of the people who truly defined America.”—Robert Cowley, founding editor of MHQ: The Quarterly Journal of Military History

“William Tecumseh Sherman was the most fiery, complicated, and inconsistent of America’s great generals. In Robert L. O’Connell’s aptly titled Fierce Patriot, he brings this conflicted American hero vividly to life. For both the Civil War buff and the general reader, Fierce Patriot offers new and arresting insights into this remarkable figure and his impact on the world in which he lived.”—Charles Bracelen Flood, author of Grant and Sherman: The Friendship That Won the Civil War