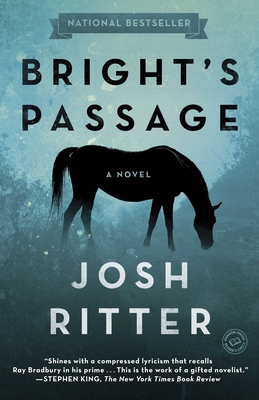 The acclaimed songwriter's first novel follows a young WWI veteran, his infant son, and a guardian angel of debatable reliability. Struggling to provide for his baby, Henry Bright must escape a forest fire while eluding the insane pursuit of the Colonel, his recently dead wife's father. Ritter's wonderfully imagined characters inhabit a story where the real and the surreal coexist like the stuff of one's most vivid dreams. A marvelous feat of riveting storytelling and lyrical prose. — Stan Hynds

Henry Bright has newly returned to West Virginia from the battlefields of the First World War. Griefstruck by the death of his young wife and unsure of how to care for the infant son she left behind, Bright is soon confronted by the destruction of the only home he’s ever known. His hopes for safety rest with the angel who has followed him to Appalachia from the trenches of France and who now promises to protect him and his son. Haunted by the abiding nightmare of his experiences in the war and shadowed by his dead wife’s father, the Colonel, and his two brutal sons, Bright—along with his newborn—makes his way through a ravaged landscape toward an uncertain salvation.

DON’T MISS THE EXCLUSIVE CONVERSATION BETWEEN JOSH RITTER AND NEIL GAIMAN IN THE BACK OF THE BOOK.

Josh Ritter is a songwriter from Moscow, Idaho. His albums include The Animal Years and So Runs the World Away. Bright’s Passage is his first novel. He lives in New York.

“Shines with a compressed lyricism that recalls Ray Bradbury in his prime . . . This is the work of a gifted novelist.”—Stephen King, The New York Times Book Review

“[An] eloquent and intensely moving historical novel . . . a work of masterful, stunning prose.”—Oprah.com

“Propelled by short chapters that read like powerful vignettes, all of which lead to a final confrontation as haunting as any ballad Ritter could have written.”—San Francisco Chronicle