Blood and Beauty: A Novel About the Borgias (Paperback) 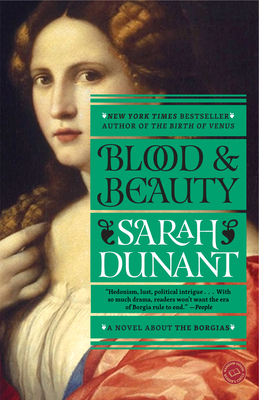 A splendid historical novel about the Borgias, especially Roderigo (Pope Alexander VI) and two of his illegitimate, and beloved, children - Cesare and Lucrezia. Well researched (with a bibliography), a lush Italy, richly imagined characters who belie their evil reputations. A terrific read. — Louise Jones

The New York Times bestselling author of the acclaimed Italian Renaissance novels—The Birth of Venus, In the Company of the Courtesan, and Sacred Hearts—has an exceptional talent for breathing life into history. Now Sarah Dunant turns her discerning eye to one of the world’s most intriguing and infamous families—the Borgias—in an engrossing work of literary fiction.

By the end of the fifteenth century, the beauty and creativity of Italy is matched by its brutality and corruption, nowhere more than in Rome and inside the Church. When Cardinal Rodrigo Borgia buys his way into the papacy as Alexander VI, he is defined not just by his wealth or his passionate love for his illegitimate children, but by his blood: He is a Spanish Pope in a city run by Italians. If the Borgias are to triumph, this charismatic, consummate politician with a huge appetite for life, women, and power must use papacy and family—in particular, his eldest son, Cesare, and his daughter Lucrezia—in order to succeed.

Cesare, with a dazzlingly cold intelligence and an even colder soul, is his greatest—though increasingly unstable—weapon. Later immortalized in Machiavelli’s The Prince, he provides the energy and the muscle. Lucrezia, beloved by both men, is the prime dynastic tool. Twelve years old when the novel opens, hers is a journey through three marriages, and from childish innocence to painful experience, from pawn to political player.

Stripping away the myths around the Borgias, Blood & Beauty is a majestic novel that breathes life into this astonishing family and celebrates the raw power of history itself: compelling, complex and relentless.

Look for special features inside. Join the Random House Reader’s Circle for author chats and more.

“Dunant transforms the blackhearted Borgias and the conniving courtiers and cardinals of Renaissance Europe into fully rounded characters, brimming with life and lust.”
—The New York Times Book Review

“Like Hilary Mantel with her Cromwell trilogy, [Sarah] Dunant has scaled new heights by refashioning mythic figures according to contemporary literary taste. This intellectually satisfying historical saga, which offers blood and beauty certainly, but brains too, is surely the best thing she has done to date.”
—The Miami Herald

“Compelling female players have been a characteristic of Dunant’s earlier novels, and this new offering is no exception. . . . The members of this close-knit family emerge as dynamic characters, flawed but sympathetic, filled with fear and longing.”
—The Seattle Times

“Dazzling . . . a triumph on an epic scale . . . filled with rich detail and page-turning drama.”
—BookPage

Sarah Dunant is the author of the international bestsellers The Birth of Venus, In the Company of the Courtesan, and Sacred Hearts, which have received major acclaim on both sides of the Atlantic. Her earlier novels include three Hannah Wolfe crime thrillers, as well as Snowstorms in a Hot Climate, Transgressions, and Mapping the Edge, all three of which are available as Random House Trade Paperbacks. She has two daughters and lives in London and Florence.

“A brilliant portrait of a family whose blood runs ‘thick with ambition and determination’ . . . The Machiavellian atmosphere—hedonism, lust, political intrigue—is magnetic. With so much drama, readers won’t want the era of Borgia rule to end.”
—People (four stars)

“In Blood and Beauty, Dunant follows the path set by Hilary Mantel with Wolf Hall and Bring Up the Bodies. Just as Mantel humanized and, to an extent, rehabilitated the brilliant, villainous Thomas Cromwell and the court of Henry VIII, Dunant transforms the blackhearted Borgias and the conniving courtiers and cardinals of Renaissance Europe into fully rounded characters, brimming with life and lust. . . . Dunant illuminates the darkened narrative of the Borgia record, reviving stained glass with fresh light, refreshing the brilliance of the gold and blue panes history has marred without dulling the blood-red that glows everywhere around them.”
—The New York Times Book Review

“[Dunant’s] depiction of passionate people obsessed by the idea of a dynasty that will outlive them is not only intelligent and restrained but also lit by an affecting streak of lyricism. . . . Like Hilary Mantel with her Cromwell trilogy, Dunant has scaled new heights by refashioning mythic figures according to contemporary literary taste. This intellectually satisfying historical saga, which offers blood and beauty certainly, but brains too, is surely the best thing she has done to date.”
—The Miami Herald

“Another achievement for Dunant is her ability to re-imagine history. Although the Borgias are often called the most notorious family in Italian Renaissance . . . Dunant manages to show different facets of their personalities. If history has left some blanks in this regard, Dunant fills them. The members of this close-knit family emerge as dynamic characters, flawed but sympathetic, filled with fear and longing, and believable.”
—The Seattle Times

“Dazzling . . . a triumph on an epic scale . . . filled with rich detail and page-turning drama.”
—BookPage

“British author Sarah Dunant is the reigning queen of the historical novel set in Renaissance Italy. . . . This novel will be most rewarding for those with a keen taste for history and a willingness to stick with a lengthy story with no real heroes but plenty of fascinating and really bad behavior.”
—Richmond Times-Dispatch

“Hugely enjoyable . . . an old-fashioned rollercoaster of a story . . . [Dunant] triumphs, like all good novelists . . . in a deft, shrewd, precise use of killer detail.”
—The Guardian (U.K.)

“[Dunant] is in her element. . . . She brings fifteenth-century Italian cities vividly alive. . . . [Blood & Beauty] is an intelligent and passionate book that will no doubt thrill Borgia-lovers.”
—The Sunday Times (U.K.)

“For anyone obsessed with the Borgias, this tome is right up your alley—it follows the scandal-plagued family, as the patriarch Cardinal Rodrigo attempts to buy his way into the papacy. Not only does this story have family drama, illegitimate children, and a religious figure with an enormous taste for women, but it’s based on true events. . . . Everything was more fascinating in the olden days.”
—Refinery29

“What a marvelous feast of vices and desires Sarah Dunant gives us—lust and ambition, passion and power, destiny born and bought. The Borgias are arguably the most intriguing and ruthless family in all of history, and Dunant brings them ravishingly, bristlingly to life.”
—Paula McLain, author of The Paris Wife

“An astounding achievement, extensively researched and exquisitely written . . . The Borgias have never been so human, and so humanely portrayed.”
—Melanie Benjamin, author of The Aviator’s Wife

“A fascinating read full of vivid detail and human pathos . . . Dunant opens a window into the extraordinary machinations and skullduggery of the Borgias and provides us with a richness of description that beautifully locates them in their own time.”
—Amanda Foreman, author of A World on Fire

“An engrossing tale of beauty and corruption, Blood & Beauty is meticulously crafted, and utterly convincing: a work of a skilled historian and a masterful storyteller who makes the Borgias live and breathe.”
—Eva Stachniak, author of The Winter Palace: A Novel of Catherine the Great

“Brilliant and utterly bone-chilling, Blood & Beauty held me spellbound from beginning to end. This exquisite, seductive portrait is destined to become a classic.”
—Anne Fortier, author of Juliet

“A masterpiece of biographical fiction, and likely her best novel yet . . . With brilliant detail and flawless prose, she opens the doors to the Vatican of Pope Alexander VI (Rodrigo Borgia), his vibrant feuding children, and his sultry mistress. It’s a work I’m not likely to ever forget.”
—Sandra Gulland, author of The Josephine Bonaparte Trilogy

“Blood & Beauty is a wonderful novel, taking you deep into the world of Renaissance passion and the Renaissance papacy. Part of me was happily lost in the time travel, and part of me was repeatedly struck by how vividly ancient Rome met modern Rome, and how the city of history came to life.”
—Mary Beard, historian and author of The Fires of Vesuvius: Pompeii Lost and Found