Independence Lost: Lives on the Edge of the American Revolution (Paperback) 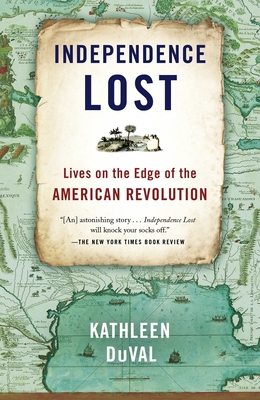 For those who's knowledge of the American Revolution revolves around the Northeast, Independence Lost will be an eye-opener. DuVal uses several personal accounts to trace the Revolution's path in the Gulf Coast, a region neglected in traditional histories. Scottish entrepreneurs, Acadian farmers, Choctaw-British diplomats and French-owned slaves are represented in this vivid account of British, American, French and Spanish struggles to lay claim to eastern North America. These varied narratives exemplify the thesis that 1776 marked the start of a global conflict, not simply a rebellion. — Nate George

Over the last decade, award-winning historian Kathleen DuVal has revitalized the study of early America’s marginalized voices. Now, in Independence Lost, she recounts an untold story as rich and significant as that of the Founding Fathers: the history of the Revolutionary Era as experienced by slaves, American Indians, women, and British loyalists living on Florida’s Gulf Coast.

While citizens of the thirteen rebelling colonies came to blows with the British Empire over tariffs and parliamentary representation, the situation on the rest of the continent was even more fraught. In the Gulf of Mexico, Spanish forces clashed with Britain’s strained army to carve up the Gulf Coast, as both sides competed for allegiances with the powerful Chickasaw, Choctaw, and Creek nations who inhabited the region. Meanwhile, African American slaves had little control over their own lives, but some individuals found opportunities to expand their freedoms during the war.

Independence Lost reveals that individual motives counted as much as the ideals of liberty and freedom the Founders espoused: Independence had a personal as well as national meaning, and the choices made by people living outside the colonies were of critical importance to the war’s outcome. DuVal introduces us to the Mobile slave Petit Jean, who organized militias to fight the British at sea; the Chickasaw diplomat Payamataha, who worked to keep his people out of war; New Orleans merchant Oliver Pollock and his wife, Margaret O’Brien Pollock, who risked their own wealth to organize funds and garner Spanish support for the American Revolution; the half-Scottish-Creek leader Alexander McGillivray, who fought to protect indigenous interests from European imperial encroachment; the Cajun refugee Amand Broussard, who spent a lifetime in conflict with the British; and Scottish loyalists James and Isabella Bruce, whose work on behalf of the British Empire placed them in grave danger. Their lives illuminate the fateful events that took place along the Gulf of Mexico and, in the process, changed the history of North America itself.

Adding new depth and moral complexity, Kathleen DuVal reinvigorates the story of the American Revolution. Independence Lost is a bold work that fully establishes the reputation of a historian who is already regarded as one of her generation’s best.

“[An] astonishing story . . . Independence Lost will knock your socks off. To read [this book] is to see that the task of recovering the entire American Revolution has barely begun.”—The New York Times Book Review

“A completely new take on the American Revolution, rife with pathos, double-dealing, and intrigue.”—Elizabeth A. Fenn, Pulitzer Prize–winning author of Encounters at the Heart of the World

Kathleen DuVal teaches Early American history and American Indian history at the University of North Carolina at Chapel Hill. Her previous books include The Native Ground: Indians and Colonists in the Heart of the Continent, winner of the J. G. Ragsdale Book Award from the Arkansas Historical Association. She is also co-editor of Interpreting a Continent: Voices from Colonial America.

“[An] astonishing story . . . Paint yourself a mental picture of the American War of Independence. If all you see are British redcoats battling minutemen and Continentals, Kathleen DuVal’s Independence Lost will knock your socks off. . . . To read [this book] is to see the task of recovering the entire American Revolution has barely begun.”—The New York Times Book Review

“A remarkable, necessary—and entirely new—book about the American Revolution. DuVal’s history reminds us that if we celebrate a more inclusive vision of the United States this Fourth of July, one that seems ascendant these days, it is not the one the founding generation had in mind.”—The Daily Beast

“Declaring that the American Revolution was fought in the name of empire almost seems blasphemous. However, DuVal excellently details how the event was actually a war for empire along the Gulf Coast of the United States. . . . Highly recommended for students and scholars of the revolution, American South, borderlands, and forgotten theaters of war; along with those looking for a solid read in history.”—Library Journal (starred review)

“With deep research and lively writing, Kathleen DuVal musters a compelling cast to recover the dramatic story of the American Revolution in borderlands uneasily shared by rival empires, enslaved people, and defiant natives. She deftly reveals powerful but long-hidden dimensions of a revolution rich with many possible alternatives to the triumph of the United States.”—Alan Taylor, Pulitzer Prize–winning author of The Internal Enemy

“In a completely new take on the American Revolution and a riveting contribution to history, Kathleen DuVal explains how an unexpected cast of Gulf Coast characters fought for their own version of self-determination. The story is gripping, rife with pathos, double-dealing, and intrigue. The outcome is compelling, reverberating through American history to the present.”—Elizabeth A. Fenn, Pulitzer Prize–winning author of Encounters at the Heart of the World

“Independence Lost is an extraordinary achievement. Rooting compelling personal stories in deep original research, Kathleen DuVal brings to life a war for American independence that will be utterly new to most readers.”—Daniel K. Richter, Pulitzer Prize finalist and author of Before the Revolution

“Kathleen DuVal has found an exciting and accessible way to convey this history without sacrificing the richness and intricacy of a part of North America where multiple Indian nations—as well as Britain, France, Spain, and the emerging United States—competed with one another for power.”—Andrés Reséndez, author of A Land So Strange

“A superb example of how the familiar becomes unfamiliar when viewed from a fresh angle, Independence Lost is a work of stunning scholarship with which anyone interested in the origins of the United States will have to contend.”—Andrew Cayton, co-author of The Dominion of War

“With stirring prose and through inventive, indefatigable research, Kathleen DuVal recovers a place in time and a cast of compelling characters that seldom feature in our accounts of the wars that created the United States. The result is an important, original, and entirely unforgettable book.”—Jane Kamensky, author of The Exchange Artist