The Matchmaker of Kenmare: A Novel of Ireland (Paperback) 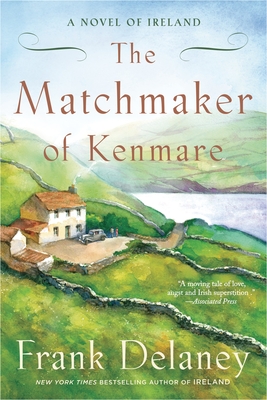 This is book number 2 in the A Novel of Ireland series.

In this novel, Mr. Delaney builds on our love of his historical fiction about Ireland and teases us further into the Irish-American experience at the end of WWII. The complex character of Ben MacCarthy from Venetia Kelly's Traveling Show engages the friendship of a young village matchmaker and their stories begin to intertwine, taking them to France and ultimately Germany and the U.S. on their individual missions. Interesting characters and circumstances both old and new make this a fresh experience for the many fans of Ireland:A Novel, Tipperary and Shannon.

In the summer of 1943, as World War II rages on, Ben MacCarthy is haunted by the disappearance of his wife, the actress Venetia Kelly. Searching for purpose by collecting stories for the Irish Folklore Commission, he travels to a remote seaside cottage to profile the enigmatic Miss Kate Begley, the Matchmaker of Kenmare. Ben is immediately captivated by her, and a powerful friendship is forged. But when Charles Miller, a handsome American military intelligence officer, arrives on the scene, Miss Begley looks to make a match for herself. Miller needs a favor, but it will be dangerous. Under the cover of their neutrality as Irish citizens, Miss Begley and Ben travel to London and effectively operate as spies. As they are drawn more deeply and painfully into the conflict, both discover the perils of neutrality—in both love and war.

Steeped in colorful history, The Matchmaker of Kenmare is a lush and surprising novel, rich as myth, tense as a thriller, and, like all grand tales, harrowing, sometimes hilarious, and heartbreaking.

Frank Delaney is the author of the New York Times bestselling novel Ireland, as well as The Last Storyteller, The Matchmaker of Kenmare, Venetia Kelly’s Traveling Show, Tipperary, Shannon, and Simple Courage: A True Story of Peril on the Sea. A former judge for the Man Booker Prize, Delaney enjoyed a prominent career in BBC broadcasting before becoming a full-time writer. Delaney died in 2017.

“A moving tale of love, angst and Irish superstition.”—Associated Press

“With its memorable characters and variety of adventures, [Frank] Delaney’s brand of Irish fabulism is . . . a delight to read. [The Matchmaker of Kenmare] burnishes this veteran writer’s reputation as a consummate storyteller.”—Kirkus Reviews (starred review)

“Panoramic . . . Delaney spins an exciting yarn of romance and intrigue, and in Kate, he has created an indomitable, unforgettable character.”—Publishers Weekly

“Irish storytelling at its best.”—Library Journal