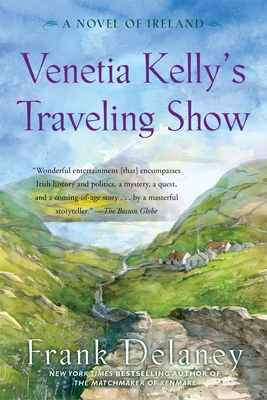 This is book number 5 in the A Novel of Ireland series.

This master storyteller returns to early 20th century Ireland with another splendid tale. Drawing from the complex history of the time as well as the emotional culture he is so knowledgeable about, he treats us to a story that touches the heart and mind. The theater and politics of the time manipulate the characters in a dizzying dance that that tantalizes and satisfies. — Karen Frank

January 1932: Ben MacCarthy and his father watch a vagabond variety revue making a stop in the Irish countryside. After a two-hour kaleidoscope of low comedy, juggling, tumbling, and other entertainments, Ben’s father, mesmerized by Venetia Kelly, the troupe’s magnetic headliner, makes a fateful decision: to abandon his family and set off on the road with Miss Kelly and her caravan. Ben’s mother, shattered by the desertion, exhorts, “Find him and bring him back,” thereby sending the boy on a Homeric voyage into manhood.

Frank Delaney is the author of the New York Times bestselling novel Ireland, as well as Tipperary, Shannon, and Simple Courage: A True Story of Peril on the Sea. A former judge for the Man Booker Prize, Delaney enjoyed a prominent career in BBC broadcasting before becoming a full-time writer. Born in Tipperary, Ireland, he now lives in New York City and Connecticut.

“Wonderful entertainment [that] encompasses Irish history and politics, a mystery, a quest, and a coming-of-age story . . . by a masterful storyteller.”—The Boston Globe

“Entrancing . . . Delaney unleashes a cavalcade of memorable characters worthy of John Irving. . . . But the book’s fascinating Kelly women give the story its true magic. . . . Teeming with life and a sprawling, chaotic energy, [this novel] scores another goal for Delaney.”—The Plain Dealer

“Delaney tells a wonderful story about Ireland in a troubled time, following Ben into manhood with compassion, intrigue and humor.”—The Oklahoman

“This expansive tale of politics, tragedy, and revenge is Irish storytelling at its best. Full of vibrant, well-crafted characters and satisfyingly high drama, it will appeal to fans of sweeping Irish sagas.”—Library Journal