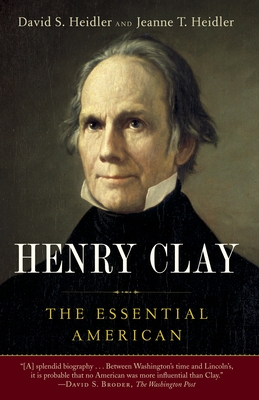 Splendid all the way-a rich biography of the most important American political figure of the 19th century, excepting Andrew Jackson. As smooth as the Kentucky bourbon Clay so enjoyed ! — Bill Lewis

He was the Great Compromiser, a canny and colorful legislator whose life mirrors the story of America from its founding until the eve of the Civil War. Speaker of the House, senator, secretary of state, five-time presidential candidate, and idol to the young Abraham Lincoln, Henry Clay is captured in full at last in this rich and sweeping biography.

David S. Heidler and Jeanne T. Heidler present Clay in his early years as a precocious, witty, and optimistic Virginia farm boy who at the age of twenty transformed himself into an attorney. The authors reveal Clay’s tumultuous career in Washington, including his participation in the deadlocked election of 1824 that haunted him for the rest of his career, and shine new light on Clay’s marriage to plain, wealthy Lucretia Hart, a union that lasted fifty-three years and produced eleven children.

Featuring an inimitable supporting cast including Thomas Jefferson, James Madison, and Abraham Lincoln, Henry Clay is beautifully written and replete with fresh anecdotes and insights. Horse trader and risk taker, arm twister and joke teller, Henry Clay was the consummate politician who gave ground, made deals, and changed the lives of millions.

David S. Heidler and Jeanne T. Heidler have collaborated on books about the early American republic, the Antebellum period, and the Civil War. Their editorial work includes Encyclopedia of the War of 1812 and the award-winning Encyclopedia of the American Civil War. They are the authors of Henry Clay: The Essential American; Old Hickory’s War: Andrew Jackson and the Quest for Empire; The War of 1812; Manifest Destiny; Daily Life in the Early American Republic: Creating a New Nation,1790-1820; and The Mexican War. In addition to their work as authors, the Heidlers are general editors of monographs on U.S. civil-military relations, American soldiers’ lives, and life on the home front. Their next book with Random House, Washington’s Circle: The Creation of the President, is scheduled to hit shelves on March 24, 2015.

“[A] splendid biography . . . Between Washington’s time and Lincoln’s, it is probable that no American was more influential than Clay.”—David S. Broder, The Washington Post

“A revealing portrait of Henry Clay, a man who was critical to the life of the nation in the tumultuous nineteenth century. Never president but always in the arena, Clay is a remarkable architect of the Union, and we owe the Heidlers a debt for bringing him to life in these pages.”—Jon Meacham, Pulitzer Prize–winning author of American Lion: Andrew Jackson in the White House

“Henry Clay’s unparalleled combination of skill, charisma, and energy are on display in this biography.”—James M. McPherson, Pulitzer Prize–winning author of Battle Cry of Freedom: The Civil War Era

“An enormously engaging picture of this man and his era.”—Heather Cox Richardson, The Washington Post

“It is a measure of the Heidlers’ success that they rescue Harry of the West from his own legend. . . . [They] write with one voice and contagious enthusiasm.”—Richard Norton Smith, The National Interest