Farewell, My Subaru: An Epic Adventure in Local Living (Paperback) 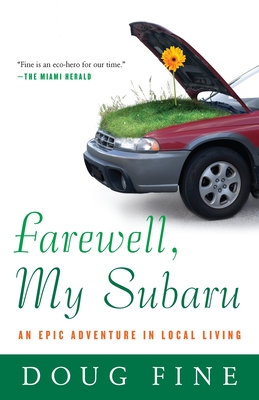 Doug Fine moves to the New Mexican desert with the goal of kicking his fossil fuel habit and getting off the grid. He has no experience whatsoever with ranching, farming, or any of the things people need to be self-sufficient. To top it off, he's a Wal-Mart addict. He kicks his addiction early in the book and makes no secret of the fact that he asks for help whenever he can. He also buys two goats to help him get his other habit off-grid: ice cream.

A few solar panels and one veggie oil run monster truck later, Fine is well on his way to reaching his goals. He plants a garden (several times, due to many crop-decimating hail storms), installs a solar hot water heater and gets himself some chickens. He almost makes the tasks seem simple (given the right friends and enough money, of course). He certainly makes it sound fun, especially with all of the humorous and well-placed recipes (rattlesnake stew when he discovers a rattlesnake near his home, although in this case the rattlesnake escapes unharmed).

The part that I found most interesting was his veggie oil car. I had all but forgotten about these little miracles with my obsession to buy an electric car and power it with solar panels. Of course a much cheaper option is to get an old diesel car and convert it to veggie oil. The image of a massive fuel-guzzling truck roaring around town spurting out chinese food-scented emissions is almost too good to pass up!

My only criticism of this book is the lack of sources. Throughout the story Fine drops a few facts and figures having to do with energy and resource consumption, typical statistics to find in a book on environmentalism, but he sites no sources. Where did this information come from? There is no bibliography, no where to go for further reading. If he picked these facts up from the internet, what are the websites? Who did the studies? Who collected this data? I've never come across a book with facts that lacked sources and I found the whole thing confusing.

All in all, it was a great book. Doug Fine is a humorous writer and a great story teller. At 200 pages it's a quick and enjoyable read but still full of insight. I picked it up, thinking it looked like fun. Turns out you can judge a book by its cover, because fun it is.

Advance praise for Farewell, My Subaru

“Fine is an amiable and self-deprecating storyteller in the mold of Douglas Adams. If you're a fan of Hitchhiker's Guide to the Galaxy-style humor -- and also looking to find out how to raise your own livestock to feed your ice-cream fetish -- Farewell may prove a vital tool.” —— The Washington Post

“This is Green Acres for the smart set—: a witty and educational look at sustainable living. Buy it, read it, compost it.”
–A. J. Jacobs, author of The Year of Living Biblically

“The details of Doug Fine’s experiment in green living are great fun——but more important is the spirit, the dawning understanding that living in connection to something more tangible than a computer mouse is what we were built for. It’ll make you want to move!”
–Bill McKibben, author of Deep Economy: The Wealth of Communities and the Durable Future

Like many Americans, Doug Fine enjoys his creature comforts, but he also knows full well they keep him addicted to oil. So he wonders: Is it possible to keep his Netflix and his car, his Wi-Fi and his subwoofers, and still reduce his carbon footprint?

In an attempt to find out, Fine up and moves to a remote ranch in New Mexico, where he brazenly vows to grow his own food, use sunlight to power his world, and drive on restaurant grease. Never mind that he’s never raised so much as a chicken or a bean. Or that he has no mechanical or electrical skills.

Whether installing Japanese solar panels, defending the goats he found on Craigslist against coyotes, or co-opting waste oil from the local Chinese restaurant to try and fill the new “veggie oil” tank in his ROAT (short for Ridiculously Oversized American Truck), Fine’s extraordinary undertaking makes one thing clear: It ain’t easy being green. In fact, his journey uncovers a slew of surprising facts about alternative energy, organic and locally grown food, and climate change.

Both a hilarious romp and an inspiring call to action, Farewell, My Subaru makes a profound statement about trading today’s instant gratifications for a deeper, more enduring kind of satisfaction.

DOUG FINE, a contributor to NPR and Public Radio International, has reported from remote perches in Burma, Rwanda, Laos, Guatemala, and Tajikistan. He is the author of Not Really an Alaskan Mountain Man, and lives in southern New Mexico.